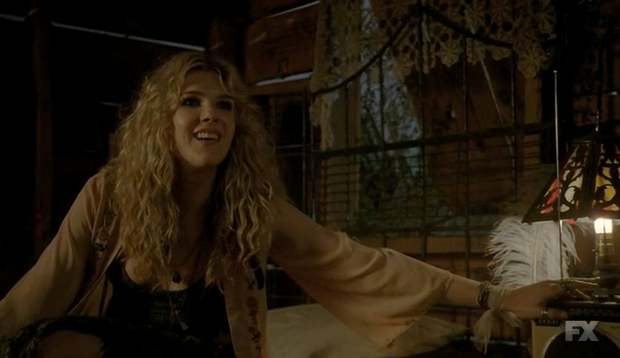 THE STEVIE NICKS WITCH RUMOR IS BACK, THANKS TO 'AMERICAN HORROR STORY: COVEN'
By Kelsea Stahler

On Wednesday night, a rumor that plagued Stevie Nicks in the 1980s returned. Misty Day (Lily Rabe), one witch of many on American Horror Story: Coven, states matter of factly that of course, Nicks is a famous witch and that one of the Fleetwood Mac songs she wrote, "Rhiannon," is her witchy anthem. This would be a funny little quirk, like watching Michael Jackson jokingly play himself as an alien in Men in Black II, if Nicks hadn't spent a great deal of the '80s trying to squash this very real rumor, only to see it trotted back out for the purposes of a campy horror TV show. As it turns out, Nicks gave Ryan Murphy permission to use her. But it's important for the younger folks out there (you know, the ones who, like Zoe, only know Nicks as that mentor from American Idol), Stevie is not actually a witch or a practicing Wiccan, however great her aesthetic may be for AHS' purposes.

Continue to the full article at Bustle

Rumors about Stevie Nicks being a witch have hounded the singer-songwriter for years, so it’s little surprise the writers of “American Horror Story: Coven” have woven the long-time Fleetwood Mac songstress into this season’s storyline.

In Wednesday night’s episode, “Rhiannon” plays in the background in Misty’s cabin, where Zoe (Taissa Farmiga) has brought her Frankenstein of a boyfriend, Kyle (Evan Peters).

“Who sings this?” Zoe asks Misty.

“Who sings it?” Misty asks with the incredulity adults use on children oblivious to pop culture facts that pre-date them.

“Fleetwood Mac,” Misty continues, looking at a photo of the bewitching singer. “Stevie Nicks is my hero.”

“That’s Stevie Nicks from ‘American Idol?’” Zoe asks. (I love the humor so far this season.)

“Stevie Nicks. The White Witch. The only witch before you I’ve ever known,” Misty says.

“Listen to the lyrics,” Misty says wistfully. “This song was her anthem.”

Continue to the full article at Chicago Sun Times