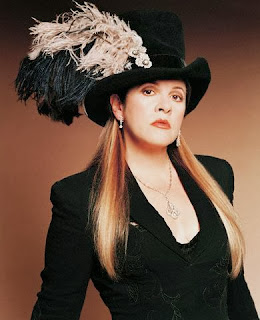 Well this just makes so much sense!!! and takes this show and the Stevie Nicks connection about 10 notches up!!


Stevie Nicks is set to make a guest appearance on FX's hit series American Horror Story: Coven later this season, creator Ryan Murphy revealed on Tuesday. "Guess who's visiting the Coven? The legendary Stevie Nicks!" he tweeted to his followers. (Let's all do a Stevie Nicks shawl twirl over this epic casting news, shall we?!)

While she's yet to pop up in New Orleans, Nicks has had quite the presence on the witchy series thanks to Lily Rabe's kooky hippie character Misty Day, who idolizes the legendary singer-songwriter. And a source who works on the show exclusively spills to us that Misty's dreams come true when Nicks "comes to meet her biggest fan. And maybe sing with her." We. Die. Expect to see Nicks pop up in the Big Easy in episode ten.

Murphy recently revealed Nicks was a huge inspiration for the character of Misty.

"I love her character, she is obsessed with Stevie Nicks. The season really is an allegory and a metaphor for any minority group in the country where you feel alone, so she's a girl that has never known any other witches and all she's ever known is Stevie Nicks," he explained. "So I reached out to Stevie Nicks and asked her if we could use her music, and she thought about it for a while and then she said, "Oh OK, since it's you, I'll do it." Lily has an amazing Stevie Nicks shawl twirl scene in episode three. It's really fun and great and we use I think eight Stevie Nicks songs this year, so that's our musical stuff that we do."

American Horror Story was recently renewed for a fourth season, surprising no one given Coven's monster ratings: It's averaging 7.7 million viewers per episode, a franchise-best. 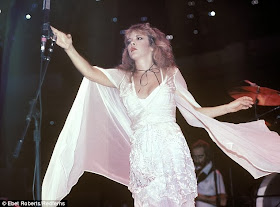 She crafted an ethereal, mystical persona as the shawl-twirling frontwoman of Fleetwood Mac.
And Stevie Nicks will make her acting debut as the 'White Witch' on an upcoming episode of American Horror Story: Coven.

Series creator Ryan Murphy made the announcement on his Twitter page Tuesday, writing: 'Guess who's visiting the Coven? The legendary Stevie Nicks!'

The 65-year-old rock goddess - born Stephanie - was already a major source of inspiration for the show's necromancer witch, Misty Day.

Lily Rabe, who plays Misty, is just as obsessed with the eight-time Grammy nominee as her ethereal character.

'If I meet her, I actually think I might die on the spot,' the 31-year-old actress told Entertainment Weekly.
'I don't get that crazy about a lot of people. I’m usually pretty cool, calm, and collected. But I don’t know if could behave properly. I love her so much. She's just a beautiful creature.'

According to Celebuzz, Stevie 'comes to meet her biggest fan and maybe sing with her' on episode 10.

Eight of Nicks' songs will also be used this season, including Edge of Seventeen and Rhiannon.

Murphy first connected with the Gold Dust Woman singer when they used her music for his Fox series Glee.

'I called Stevie Nicks and first I said, "I want to use you in the show,"' the 47-year-old producer told EW.

'But she was very resistant because from the beginning of her career people who are in the Wiccan community had given her a hard time thinking she was a witch and she got a lot of scary fan letters. She didn’t like the darkness of that, and I explained to her the part and she’s like, "Aw f***, let's just do it. OK, I love it.'"

Stevie suddenly found herself with more free time after Fleetwood Mac were forced to cancel their tour Down Under due to bass player John McVie's cancer treatment.

Nicks and her band won't take the stage again until December 30 at the MGM Grand Garden Arena in Las Vegas.