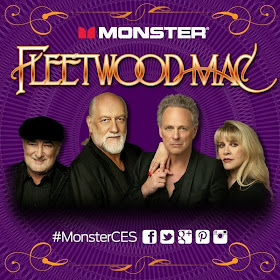 It was announced today that Fleetwood Mac would be the headliner at this years Monster Retail Awards presentation being held at the Paris Hotel in Las Vegas on January 8th.

Three Las Vegas Shows
Fleetwood Mac currently have a date booked in Las Vegas at the MGM Grand on December 30th - tickets are available at Ticketmaster. The band is also reportedly set to play the MGM Grand again the following night on New Years Eve at the Annual New Years Eve Party thrown by the MGM Grand Hotel (invite only).  Now a third show... Hope John's up to it.

The Rumours Are True: Fleetwood Mac Set For Monster Concert at CES


The annual awards ceremony/concert put on by Monster at International CES in Las Vegas traditionally features a top musical act, and this year, Monster has booked one of the highest-selling acts in music history. Jeff O’Heir of our sister site Dealerscope reported Tuesday that Fleetwood Mac will headline this year’s Monster Retail Awards presentation and party.

The event is set for Wednesday, Jan. 8 at the Paris Hotel in Las Vegas, and will mark Monster’s 35th anniversary.