Christine McVie wants to rejoin Fleetwood Mac! if they want her back? 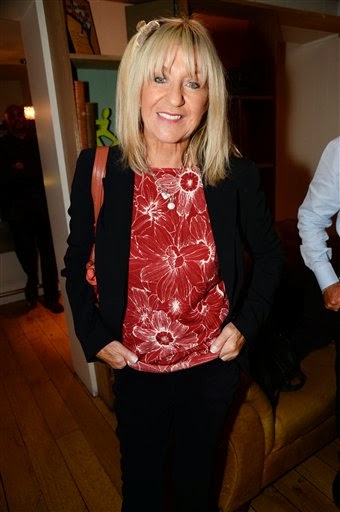 
When Christine McVie joined her old band, Fleetwood Mac, onstage during their recent shows at the O2 in London, it was billed as little more than a special treat for fans.

Yet the group's singer, keyboardist and songwriter seems to have caught the bug and has said she would like to rejoin permanently. "I like being with the band, the whole idea of playing music with them," she said. "I miss them all. If they were to ask me I would probably be very delighted … but it hasn't happened so we'll have to wait and see."

McVie was with the band for 28 years before quitting in 1998. "I think I was just music'd out," she said. "I suffered from some kind of delusion that I wanted to be an English country girl, a Sloane Ranger or something … and it took me 15 years to realise that it's not really what I wanted at all."

McVie was the band's main songwriter and central to its transformation from a blues group to the current incarnation featuring Stevie Nicks and Lindsey Buckingham that created the pop-oriented sound behind huge-selling albums such as Rumours and Tango in the Night. McVie wrote Don't Stop, Songbird and Everywhere, among many others. 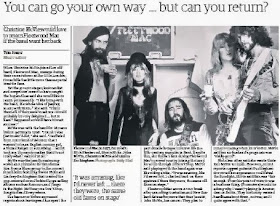 She has never before expressed regrets about leaving and has spent the past decade living a reclusive life in a
17th-century mansion in Kent. Despite this, she thrilled fans during Fleetwood Mac's current tour by joining the band for a run-through of Don't Stop. McVie said playing with the band again was like riding a bike. "It was amazing, like I'd never left. I climbed back on there again and there they were, the same old faces on stage."

Fleetwood Mac are on a tour break after cancelling several Australian and New Zealand dates after news that their bassist, John McVie, has cancer. They plan to resume touring when he is better. McVie said her ex-husband's prognosis was "really good. He's having his treatment in LA right now, but they caught it really early so he should be up and running in a couple of months."

Nicks has often said she wants Christine McVie to rejoin. However, recent reports suggest guitarist Buckingham is worried her appearance could steal the limelight. McVie said this was "fair enough. From his point of view, it was a business thing. [Promoters] would be asking why I wasn't playing in Amsterdam or Berlin. They obviously wanted headlines about them, not me, and I quite agree with that."

McVie accepts rejoining is a long way off. "It's a long way down that path if it ever were to happen. John's got to get well first, so it hasn't been talked about. We'll have to wait and see."

Her remarks were made in a Guardian interview with her and Nicks to be published later this year. During the interview, in which they discuss their friendship, their decadent 1970s lifestyle and experiences of sexism in the music industry.