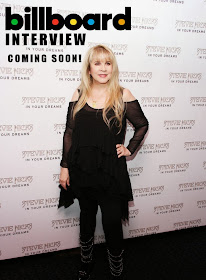 Keith Caulfield, Associate Director of Charts at Billboard Magazine will be interviewing Stevie Nicks next week for (Video).

"If you have good questions, let me know!"


So... Do you have a good question(s) for Keith to ask Stevie?  I'm sure there are a ton of burning questions you want answers to what with all the recent news about Christine McVie... John McVie, and what's in store for Fleetwood Mac... Her solo plans... The In Your Dreams Documentary... and Herbert W. Worthington's passing.

Hit Keith up on Twitter at @keith_caulfield and give him your suggested question.  You never know, your question just might make the cut!

If you aren't on Twitter, but want a question asked.. Leave your question in the comments section below and I'll send the question to Keith on Twitter on your behalf.

Just interviewed the legendary Stevie Nicks at her house for @Billboard. We could have talked forever! Video to come.
— Keith Caulfield (@keith_caulfield) December 3, 2013


Check out the full article at Billboard