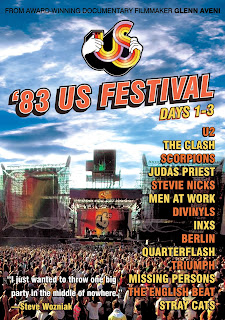 
US Festival 1983 - Day 1, Day 2 and Day 3 are available beginning Tuesday, November 19th via iTunes as 3 separate digital documentary/films each running 44 minutes long.  Day 3 of the festival features "Outside The Rain" and "Stand Back" from Stevie's set.

US Festival 1983 - Day 3
The US Festival '83 Days 1-3 are the only Steve Wozniak & Unuson officially sanctioned programs available for release. From the archives of the world famous US Festival in 1983, this was a perfect follow up to the inaugural US Festival in 1982. Digitally remastered and restored, US Festival 1983 captures a unique part of music history as witnessed by 2 mllion fans that came through the gates. The real story is told with brand new interviews from Steve Wozniak, MTV VJ Mark Goodman and the artists who experienced one of the most amazing music festivals of our time. The never-before-seen archive of US Festival '83 includes Berlin (Sex (I'm A...), Quarterflash (Find Another Fool), Missing Persons (Word), U2 (Sunday Bloody Sunday, Electric Co.), Triumph (Magic Power), and Stevie Nicks (Outside The Rain, Stand Back).

US Festival 1982
Still no word on the 1982 US Festival Documentary release date that was initially to be release on the 30th Anniversary of the event back in September, 2012.  But... the film appears to still be worked on.

September 4, 2013 - Hey US Festival fans! We've got an update for you from the director:

Dear Us Festival Fans.....we know there are many thousands of you out there clamoring to see the Us Festival: Us Generation 1982 doc feature and/or Us Festival 1983 Days 1 - 3. The following is a short update and please be patient as we are working very hard to bring you the most complete programs that fully recapture the spirit and essence of the 1982 & 1983 amazing events.

US FESTIVAL 1983 DAYS 1 - 3: In final stages of negotiations with Global Download & Streaming Services and retail DVD/Home Video. Release dates to be determined soonest.

US FESTIVAL 1982: THE US GENERATION (doc feature): In post production. We recently concluded deals with DVD/Home Video Companies in US & Japan. Upon completion of the film we will announce our distribution partners and release dates.

Thanks again Us Festival fans for your continued interest in the projects. You've waited 30 years, so I sincerely hope you can wait a few more months.

Read related posts regarding this release including the initial press release here.

Mick Fleetwood was intereviewed for the 1982 documentary/film.