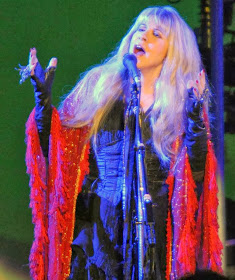 Fleetwood Mac will be ending 2013 with a bang, playing concerts in Las Vegas on the final two nights of the year.  Both shows will take place at the MGM Grand Arena, with Monday night's event open to the public and Tuesday's New Year's Eve bash an invite-only affair.

Stevie Nicks tells ABC News Radio that she's especially excited about the December 31 concert, because it will be a big communal celebration between the band and the audience.

"We get to get dressed up and go onstage and actually be at a really huge New Year's Eve party," the singer says.  "You don't even have to find the party.  It's found you at this point."

Nicks notes that playing on New Year's Eve is "always fun, because everybody is super excited."  She adds that that energy, in turn, "really rubs back off on the band."

Stevie reveals that Fleetwood Mac also has another private concert in Las Vegas scheduled for January 8.  These three shows are the first the band will play since they announced in October that bassist John McVie had been diagnosed with cancer, which forced the cancellation of a planned tour Australia and New Zealand.

Stevie suggests that the concerts will be "really good for John," because she feels it will help him "get back on the treadmill" after undergoing treatment for the disease.  Fleetwood Mac currently have no other performances on their schedule.

STEVIE NICKS HAD THE BEST YEAR EVER IN 2013: HERE'S WHY
Bustle
by Rachel Simon

In the music world, there are legends, and then there are gods. Stevie Nicks, she of Fleetwood Mac fame, is the rare person who is both. Throughout her five-decade long (!) career, Nicks has become nothing short of an icon, thanks to her musical talents, famous relationships, and general badass attitude. Yet while most people seem to feel that her biggest and best moments happened long ago, back in the ’70s and ’80s, we feel that Nicks’ life actually hit its enviable peak a few decades later, an argument that’s never been proved truer than over the past 12 months. From sold-out tour dates to appearances on hit TV shows, 2013, it seems, was the Year of Stevie Nicks. A look back at the singer’s most memorable moments: