Another Fleetwood Mac Album That's 'Worth A Damn' 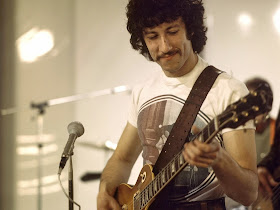 This year saw the reissue of two vintage albums by Fleetwood Mac: the hugely popular Rumours,and the last
album to feature the band's founder, Peter Green, called Then Play On.

"I think it's one of the most beautiful records and exciting records ever made," Rolling Stone senior writer David Fricke says. He wrote the liner notes for the reissue.

"I think as a statement of searching — within blues, within rock, within the possibilities of the electric guitar — like I said, I think it's one of the best records ever made," Fricke says. "I've got three copies of it — I wouldn't be caught with anything less."

Then Play On was recorded in the spring and summer of 1969, and the story of the album is the story of a band at a turning point. The previous fall, Fleetwood Mac added 17-year-old guitarist and singer Danny Kirwan, giving the band a powerful three-man front.

"You had Peter Green playing the B.B. King-style Chicago blues, mainly; Danny Kirwan with his more melodic rock, as it turned into; and then Jeremy Spencer doing these remarkable Elmore James impersonations is what they were, really," says Peter Green's biographer, Martin Celmins. "And for all that package to be in one band was a huge draw. And the response they got from the audience was wild. You know, they were just the top live band."

Continue to the full article at NPR by Tom Cole


"When people ask me in interviews to this day what's the most favorite album, I say, 'Well, I can't pick one album but I'll pick two. And one is Then Play On, and two is the Tusk album because they were really pushing the envelope," Fleetwood says. "And that is part and parcel of why bands keep going. And certainly can look back on their work and say, 'We did something that was worth a damn.' And Then Play On was worth a damn."
Nickslive at Monday, December 30, 2013
Share