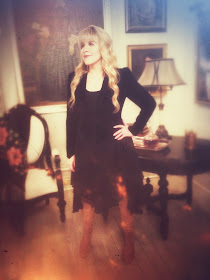 Stevie Nicks Spills 'American Horror Story' Secrets
'You'll be surprised - not with my terrific acting, but with the whole thing,' she promises.


In her new documentary, In Your Dreams, Stevie Nicks tells the story of the last time she acted: in a fourth-grade play about The Alamo. "It was so bad," Nicks says. She went home after that elementary-school debacle and told her mother that she was swearing off acting forever. Nicks stuck by that pledge until now: she's appearing early next year in American Horror Story: Coven, the third season of the horror anthology created by Ryan Murphy and Brad Falchuk (who also collaborated on Glee and Nip/Tuck).


"I go straight from nothing to the middle of American Horror Story!" marvels Nicks. Sitting in the foyer of her Los Angeles home, she said that she did the show because of her love of Glee. "I was very attracted to Glee, and to Ryan and Brad's writing of misfits. They write about people who don't fit in." Nicks identifies with outsiders, having spent her childhood moving around the western United States. (Her father was the president of soap manufacturers Armour-Dial, which was acquired by the Greyhound bus company.) "I was always the new girl," she explains. "I was lucky, because I managed to be such the chameleon that I did fit in."

Nicks had visited the Glee set in 2011 when they were covering her "Landslide" (the show later devoted a whole episode to Fleetwood Mac's Rumours). "I was devastated when Cory [Monteith] died," she remembers. "I wrote a letter to the cast, and I wrote a letter to Lea [Michele]. I tried to be of some solace." Nicks felt that she was part of the extended Murphy/Falchuk tribe, so when they approached her about American Horror Story, "I couldn't say no. I could say, 'I'm not an actress, so it's going to suck — but I will be glad to try, for you."

Her appearance (as herself) went well enough that the producers asked her to extend her time on location in New Orleans; she stayed for most of the week before Thanksgiving, working in the show's custom-built house. "I got to watch Jessica Lange do scene after scene where she was perfect," Nicks reports. "I got to watch the little witches, who were also amazing — Emma Roberts is so evil that it's just scary. You can't help but think of Julia Roberts, and you'd never think anything evil about her — but Emma is just great."

Nicks has very little experience with horror: she's seen only a handful of old horror movies, like Bride of Dracula. "They don't scare me," she says. "I just love the costumes." Now that she's a horror professional, she raves about the entire experience, with the exception of her own performance: "I don't want to be bad at anything that I do that people see. If I try to learn to skate and I'm terrible, nobody's going to know about it. But it was really fun. I now belong to a very secret society. And you'll be surprised — not with my terrific acting, but with the whole thing."
Nickslive at Tuesday, December 03, 2013
Share