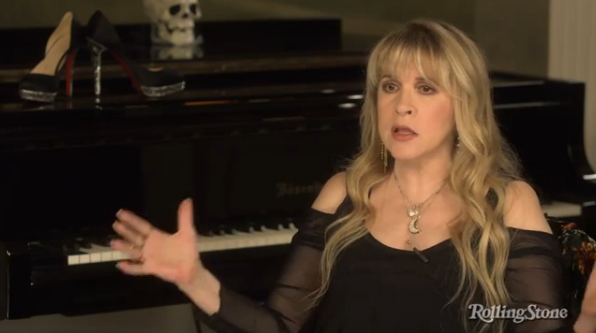 We recently visited the Los Angeles home of rock goddess Stevie Nicks, and while we can neither confirm nor deny the existence of a dedicated shawl closet and a tambourine vault, we can report that the kitchen TV was tuned to HGTV and the chandelier was fabulous. That house is featured throughout In Your Dreams, the entertaining film documenting the recording of Nicks' underrated 2011 solo album of the same name. Album producer Dave Stewart (of the Eurythmics) is also a compulsive videographer; he and Nicks are named as codirectors, although she dismissed the credit, saying, "It was very nice of them, but I didn't direct this." The documentary, recently released on DVD, was spurred by Dave Grohl: when Nicks lamented to him that her album had died, he told her that the only way to revive it was to release a film. "Go home and call Dave Stewart right now," he instructed her.

Continue to RollingStone for the full article
Nickslive at Friday, January 10, 2014
Share