Bill Murray tells Charlie Rose on CBS This Morning while talking about the effect Caddyshack has on people, how the movie helped Stevie saying:

“You know who Stevie Nicks is from Fleetwood Mac?” the actor, currently co-starring in The Monuments Men, began. “I always thought she was like an ice queen. [But] she just walked up [to me] and said, ‘You know, I was having a hard time once. And I watched [Caddyshack] for a week or something. I just kept watching that movie. And it just cheered me up so much.’”

Murray revealed that the compliment gave him a new perspective on his comedy career. “I thought, ‘Man, if I did something like that for someone who is such an important person to so many people’ . . . I felt really good about that.” 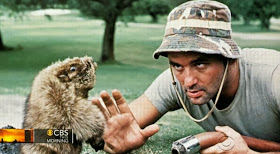 See the video clip at CBS This Morning