Stevie Nicks on Kiss: 'They Should Have Played, the Kiss Army is out there screaming for them" via @rollingstone

"It's their loss they didn't play, because the Kiss Army is out there screaming for them," says Fleetwood Mac singer 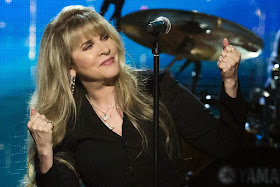 
Fleetwood Mac frontwoman Stevie Nicks paid tribute to Linda Ronstadt at the Rock and Roll Hall of Fame induction ceremony Thursday night, along with an all-star lineup of women Ronstadt influenced, as Ronstadt was unable to make an appearance herself. Following performances by Carrie Underwood, Bonnie Raitt, Emmylou Harris and Sheryl Crow, Nicks sang Buddy Holly's "It's So Easy," which Ronstadt released as her own single on the 1977 album Simple Dreams, and the Everly Brothers' "When Will I Be Loved,"  a 1975 single for Ronstadt off her Heart Like a Wheel LP. Following her performance, she told Rolling Stone how Ronstadt left an indelible impression on her at an early age.

Why did you want to pay tribute to Linda Ronstadt?
Because Linda was one of the first artists that really caught my eye when I was in high school. And I really could sing just like her. I'm sure a lot of people could. Because if you study her, you can get her vibe. So I could sing "Different Drum." I couldn't sing it as good as Carrie Underwood just sang it, I have to say, God bless her. But I got it pretty good, and I could also play it on my guitar – and I'm not the best guitar player. But I learned it and I could sing it.

Linda was really a rock star, but she was tinged with the country thing. And so she figured out a way to blend those things. So she was rockin', and she hung out with the rockers, the rock bands. But she still had that little bit of country that went along with her. And, her voice was so spectacular that all the men surrounding her – Don Henley and Glenn Frey and Jackson Browne – that whole bunch of guys that was so fantastic. So she was like myself.

How else did you relate to her?
She was never gonna do a song she didn't love. Because I've gotten in terrible arguments with producers about a song that they'll give me, and they'll go, "This could be your next hit single." And I'm like, "I don't care because I hate it, and I'm not doing it." And huge arguments over that. And I'm sure Linda Ronstadt was the same way, where she'd say, "No, I'm not doing that song. I don't like it." So she was just strong.

And I think that when she was 15, 16, 17, she was probably just like me. She was marching through the halls of her high school going, 'Everybody should be moving aside right now, because, "Don't you know who I am? I'm Linda Ronstadt, future huge rock star." It's just in her. I watched her and I listened to her. And I loved all her songs and I got told great stories about her from all the amazing people that did know her. And I don't really know how she slipped through the cracks, and I never really got to meet her. I should've gotten to meet her. Anyway, she was just like the perfect storm of everything meeting at the same time in perfection when she hit the radio.

Did you speak with her before tonight? How did you come to sing in the tribute?
We were just asked. I think that me, Carrie, Sheryl, Emmylou, Bonnie – I think the five of us certainly had no idea that we'd be chosen to do this. But it was so great because I really think we were the perfect five to do it, and I think that Glenn Frey was the perfect person to induct her because they really were good friends. So he knew her really well.

What has the backstage scene been like for you?
Well, I couldn't even watch Cat Stevens because it was right before us. And I started crying. I met him last night at Jimmy Fallon, and I got a moment to tell him how inspirational he had been to Lindsey Buckingham and to myself. For Buckingham-Nicks, Cat Stevens was one of the people that we listened to daily and sang along to those songs and played those songs and harmonized to those songs. And they meant so much to us. I mean in so many ways, they meant so much to us, not just because they were good songs; to me, it was Cat Stevens, and that was huge for us. I told him that last night.

How did he reply?
He said, "You know, I'm so glad you told me that. Because how would I know? How would I know?" And he goes, "I'm thrilled that I influenced the two people in Fleetwood Mac. I'm thrilled to know that." And he was so sweet and gentle and loving and nice.

So tonight, when he started singing, I was gonna go out there and stand on the side of the stage and watch. I started crying. I couldn't do it because if you start to cry, you can't sing. So I had to walk away. I thought, "I'll watch it on HBO, because if I go out there, I will get hysterical." He's amazing.

Who else are you excited to see tonight?
I cannot miss Hall & Oates, because Hall & Oates are huge, huge, huge for me. I really just wanted to be an R&B singer, let's face it.

What were your thoughts on the Kiss situation? Did you talk to them at all about performing?
I did not. I just gave them kisses. No, my opinion was that they should have played. When we were inducted into the Rock and Roll Hall of Fame, Lindsey's a little bit like, "OK, whatever." But let me tell you, when we walked up there and we were inducted, we stood up there and it is a moment like no other. Then you get to go and strum on your guitar and get your microphone and sing two or three songs to that audience on your day.

It is their loss that they didn't play, because the Kiss Army is out there, right now screaming for them. And they should have played for them, no matter how they felt about it. You know, Fleetwood Mac had about 500 people in it, too. They weren't all there. All 900 guitar players didn't get inducted. They weren't there. So the thing is, you know what? It's your moment. Take it. Go out there and play. It's the most important part. I like Kiss very much, and I think that they have done amazing. They're an amazing band.
Nickslive at Friday, April 11, 2014
Share