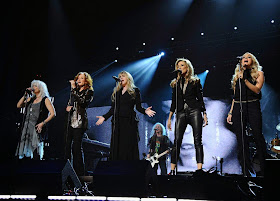 
The 29th annual induction ceremony took place April 10 at Brooklyn’s Barclays Center, marking the first time the Rock and Roll Hall of Fame Induction Ceremony has been held in Brooklyn. The HBO special features some of the biggest names in music in celebratory reunions, rousing tributes and heartfelt speeches from both presenters and inductees.

Performance: Peter Gabriel and Chris Martin perform “Washing of the Water.” Youssou N’Dour joins Gabriel for an uplifting performance of “In Your Eyes.”

Performance: Carrie Underwood begins with Ronstadt’s “Different Drum.” Bonnie Raitt and Emmylou Harris join her for a sultry “Blue Bayou,” adding Sheryl Crow for “You’re No Good” and Stevie Nicks for “It’s So Easy.” The supergroup closes with a rousing “When Will I Be Loved?”


Continue below for more:

Nirvana
Induction: Michael Stipe
Performance: Dave Grohl and Krist Novoselic pay a special tribute to Kurt Cobain by performing with four top female artists. Joan Jett leads the band on the iconic “Smells Like Teen Spirit.” Kim Gordon lends her vocals to “Aneurysm.” St. Vincent jams on “Lithium.” Lorde closes the set with her own spin on “All Apologies.”

Paul Shaffer and members of the CBS Orchestra served as backup band for several of the night’s performances.


The Rock and Roll Hall of Fame Foundation was established by legendary record executive Ahmet Ertegun and a group of music business executives to honor the artists who have defined rock and roll and have inspired and continue to inspire a generation. The Rock and Roll Hall of Fame and Museum, Inc. is the nonprofit organization that exists to educate visitors, fans and scholars from around the world about the history and continuing significance of rock and roll music. It carries out this mission both through its operation of a world-class museum designed by I.M. Pei in Cleveland, Ohio that collects, preserves, exhibits and interprets this art form and through its library and archives as well as educational programs. For further information, visit rockhall.com.

Written By Amanda Kondolojy
Nickslive at Wednesday, May 07, 2014
Share