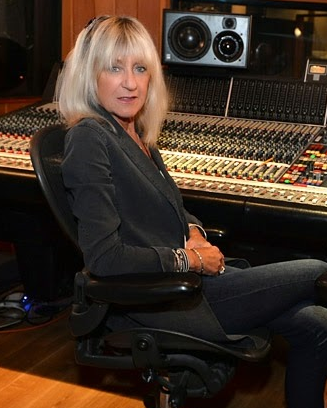 While fans have been buzzing about the return of Christine McVie for a tour this fall, most of Fleetwood Mac has quietly been in a Los Angeles studio working on new material.

Here's a short clip of Christine describing the sounds Fleetwood Mac are producing:
"There's a whole variety of songs, starting from sort of blues-based songs to very commercial songs, really. It's very, very exciting and very, very...I don't know. We get chills when we hear them."

Buckingham says the group worked on about eight songs -- whose titles include "Carnival Begin," "Red Sun" and "Too Far Gone" -- and also has material he, bassist John McVie and drummer Mick Fleetwood worked on prior to last year's Fleetwood Mac tours of North America and Europe. Stevie Nicks will also be making contributions, he says, but there are no firm release plans yet:

"There was never really any intention to try and finish this album and put it out to promote on this particular tour that we're about to embark upon because we all felt that maybe the smart call was to go out and have the novelty of Christine being back in the band be the cleaner and more to-the-point place to start, and so to go out and just re-include her songs in the body of work and have that be pretty much the presentation of that set seemed to be the right thing to do, and then to come back and when we're done with that (tour) and finish this up with Stevie, who has...assured us she will be ready to do that then. And then we'll have something to gout and promote with some new music. So it becomes sort of a long-term plan, so we're all very excited about that."
Nickslive at Thursday, May 08, 2014
Share