Fleetwood Mac welcome Christine McVie back in the fold, and plan a British return.

"It's all about you, Chris," says Stevie Nicks...
by Piers Martin
Uncut Magazine - November, 2014 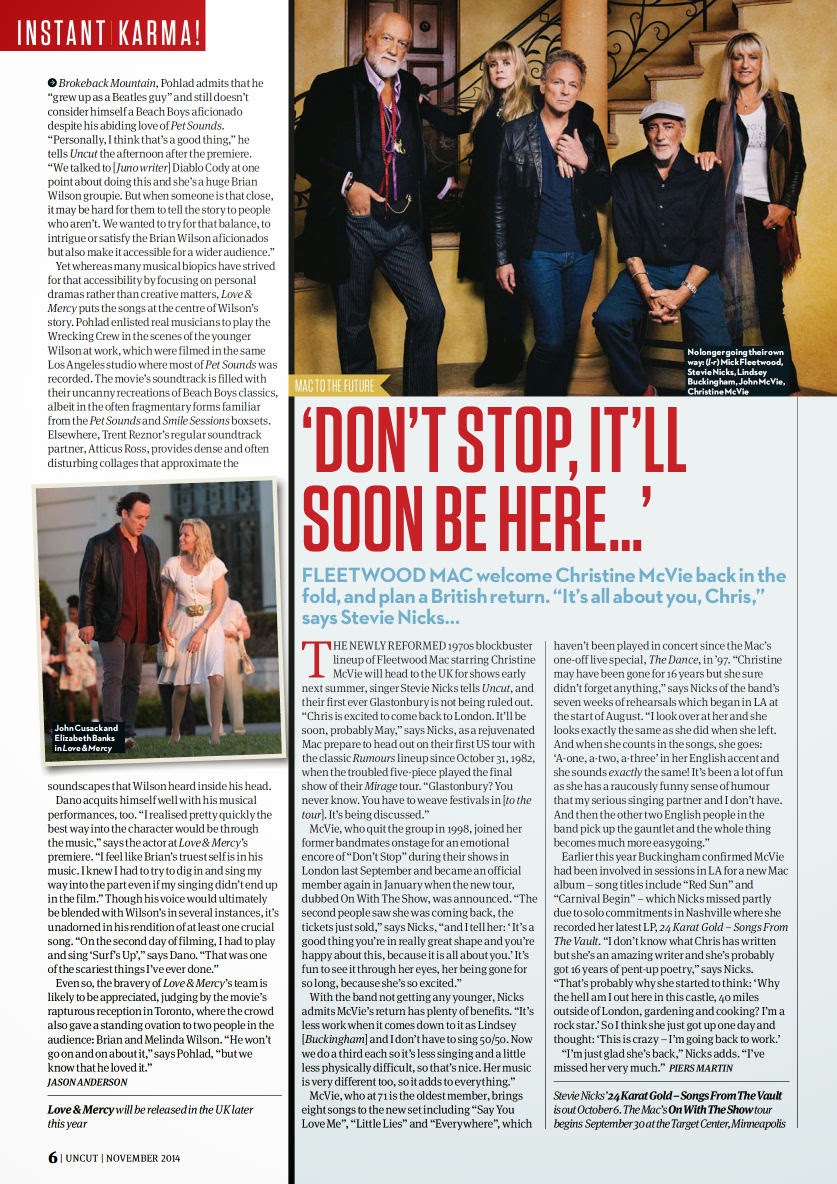 The newly reformed 1970s blockbuster lineup of Fleetwood Mac starring Christine McVie will head to the UK for shows early next summer, singer Stevie Nicks tells Uncut, and their first ever Glastonbury is not being ruled out. "Chris is excited to come back to London. It'll be soon, probably May," says Nicks, as a rejuvenated Mac prepare to head out on their first US tour with the classic Rumours lineup since October 31, 1982, when the troubled five-piece played the final show of their Mirage tour. "Glastonbury? You never know. You have to weave festivals in [to the tour]. It's being discussed."

McVie, who quite the group in 1998, joined her former bandmates onstage for an emotional encore of "Don't Stop" during their shows in London last September and became an official member again in January when the new tour, dubbed On With The Show, was announced. "The second people saw she was coming back, the tickets just sold," says Nicks, "and I tell her: 'It's a good thing you're in really great shape and you're happy about this, because it is all about you.' It's fun to see it through her eyes, her being gone for so long, because she's so excited."

With the band not getting any younger, Nicks admits McVie's return has plenty of benefits. "It's less work when it comes down to it as Lindsey [Buckingham] and I don't have to sing 50/50. Now we do a third each so it's less singing and a little less physically difficult, so that's nice. Her music is very different too, so it adds to everything."

McVie, who at 71 is the oldest member, brings eight songs to the new set including "Say You Love Me", "Little Lies" and "Everywhere", which haven't been played in concert since the Mac's one-off live special, The Dance, in '97. Christine may have been gone for 16 years but she sure didn't forget anything," says Nicks of the band's seven weeks of rehearsals which began in LA at the start of August. "I look over at her and she looks exactly the same as she did when she left. And when she counts in the songs, she goes: 'A-one, a-two, a-three' in her English accents and she sounds exactly the same! It's been a lot of fun as she has a raucously funny sense of humour that my serious singing partner and I don't have. And then the other two English people in the band pick up the gauntlet and the whole thing becomes much more easygoing."

Earlier this year Buckingham confirmed McVie had been involved in sessions in LA for a new Mac album - song titles include "Red Sun" and "Carnival Begin" - which Nicks missed partly due to solo commitments in Nashville where she recorded her latest LP, 24 Karat Gold - Songs From The Vault. "I don't know what Chris has written but she's an amazing writer and she's probably got 16 years of pent-up poetry," says Nicks.

"That's probably why she started to think: 'Why the hell am I out here in this castle, 40 miles outside of London, gardening and cooking? I'm a rock star.' So I think she just got up one day and thought: 'This is crazy - I'm going back to work.'