Stevie Nicks immerses herself in her past, gathering 16 of her long-lost songs together like errant children 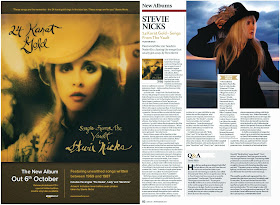 As if Stevie Nicks hasn't done enough soul-searching during her 40 years in one of the world's biggest bands... On her eighth solo album, Nicks immerses herself in her past, gathering 16 of her long-lost songs together like errant children and dressing them in traditional costume - the billowing robes and gypsy shawl - before sending them out, fully Nicksed, into the world.

24 Karat Gold - Songs From The Vault finds the 66-year old getting her memories in order with the help of longtime associates Waddy Wachtel (he first played with her on 1973's Buckingham Nicks) and Dave Stewart, producer of Nicks' last solo set, 2011's In Your Dreams, and a band of hired hands in Nashville who knocked out new versions of Nicks' old songs in 15 days last May.  In Your Dreams, somewhat tarnished by Dave Stewart's sweet tooth, took 14 months.  Fleetwood Mac records take far longer.

The songs in question stem from demos Nicks wrote at various stages in her career between 1969 and 1995, intended for her solo or Fleetwood Mac albums. One ballad, the bonus track "Twisted", written in 1995 with Lindsey Buckingham for the film Twister, she felt deserved a wider audience. "When songs go into movies you might as well dump them out the window as you're driving by because they never get heard," she tells Uncut.

Many of these songs will be familiar to Mac devotees, having appeared online and on bootlegs or boxsets in one form or another.  Indeed, Nicks' main incentive for the project was to record definitive versions of those unauthorized tracks floating around online that her assistant had drawn to her attention.  Nicks hates computers and was once so worried about internet piracy that she didn't release a solo record between 2001 and 2011, so this principled stance represents some sort of progress; if you can't beat'em, join'em. "Just because I think computers are ruining the world, I can't expect everyone to be on my wavelength," she reasons. But to most, 24 Karat Gold is effectively a brand new album, albeit one that one occasion has the luxury of revelling in the twists and turns of a vintage Nicks number like "Lady", formerly a fragile piano demo from the mid-'70's called "Knocking On Doors" that's now a footstep away from "Landslide".

With these demos newly upholstered as mid-tempo soft-rock ballands by a solid Nashville outfit, it's tempting to view the collection as an alternative look at Nicks' life in music, each song offering a slightly different take on key moments in her colourful career.  Nicks, too, her live-in voice stained with experience, seems to relish the chance to reacquaint herself through her lyrics with the girl she once was. The earliest cut here, a corny speakeasy pastiche called "Cathouse Blue", was written by a 22-year old Nicks in 1969 before she and Buckingham, who played on the original, moved to Los Angeles. By "The Dealer", a mustky Tusk-era tumble, she's already worldweary: "I was the mistress of my fate, I was the card shark / If I'd've looked a little ahead, I would've run away", runs the chorus.

On Bella Donna cast-offs "Belle Fleur" and "If You Were My Love", Elton John guitarist Davey Johnstone reprises his original role and plays on these new versions. Her trusted foil, Mike Campbell of the Heartbreakers, rolls up his sleeves for AOR james "Starshine" and "I Don't Care", trakcs he just about remembers writing with Nicks in the early 80's. "Mabel Normand", a moving parable based on the tragic life of the 1920s silent movie star, came to Nicks when she herself was dancing with the devil in 1985. Following the death of her godson from an accidental overdose in 2012, the song has a more profound resonance today.

As befits a compilation of songs that weren't up to scratch first time around, 24 Karat Gold contains a few tinpost tracks that even the Nashville boys couldn't fix. Most, too, spill over the five-minute mark. but as fresh testament from one of Rock's great survivors, it makes for a facinating listen.

24 Karat Gold - Songs From The Vault will be released October 6th in the UK.

How did you end up recording in Nashville?
The last album I did was with Dave Stewart in my house and we let it take a year because we were having so much fun. So I called him and said, "Dave, I know we spent a year doing In Your Dreams, but how can we do a record in two months?" And he said, "Go to Nashville. Those guys are on the clock." So you go to Nashville and hire six or seven of the best players in the workd and give them your 16 demos and they give you 15 days. You do two songs a day, which is unheard of in the way that we record, usually, but they are union people so they get there at nine in the morning.

How did "Hard Advice" come about?
Hard Advice" was a lecture Tom Petty gave me on his way through PHoenix one night. I was having a littel problematic moment in my life and he gave me one of his seriously hard advice lectures. He looked at me straight in the eyes with those big clear blue eyes and said, "This pain's gone on too long. Go home, light up your incense and your candles and go to your Bosendorer and write some real songs."

This could be an alternative greatest hits.
Or a greatest hits that never came out. Somebody said at one point, "If you took the last line out of this chorus it would be so much more of a hit record," and I just flat out said in front of the record company and everybody else: "I'm not trying to make a hit record here, I"m trying to make a great record." Hit records don't even sell anymore, anyway. Records don't sell anymore.