Return of the (Fleetwood) Mac! Christine McVie gives a Perfect performance as band's classic line-up plays together for first time in 16 years on Today show

By Mike Larkin
The Daily Mail 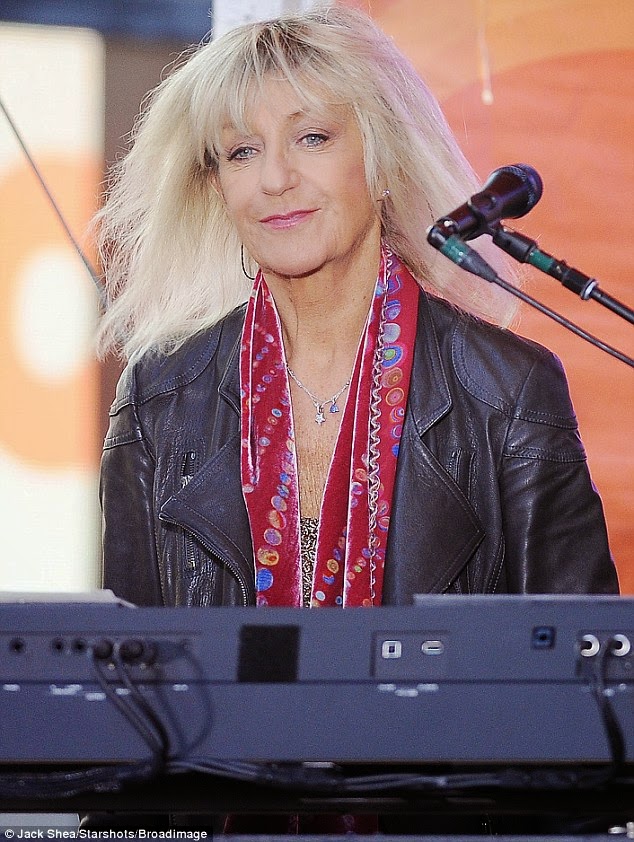 It has been 16 years since they played together as a band.

And it was like break never happened as Christine McVie and the rest of the most famous iteration of Fleetwood Mac appeared on the Today show on Thursday.

And the English-American group, who have sold more than 100 million albums, thrilled the fans with a performance of hits Little Lies, Gypsy, Go Your Own Way, and The Chain.

And Christine, 71, said a new piece of jewellery was a symbol of her intention to remain with the band for the foreseeable future.

She said: 'Stevie bought me a bracelet not long ago, it was a chain, it broke, I had someone tie it on. It means the chain is never going to break again.'


And singer Nicks said she could not believe how well the band, who are embarking on a massive tour, have been playing since her return.

Stevie said: 'She came back and just threw herself into it in such a strong and confident way, it was like a parallel universe that maybe we left'.

'I hear her count-off in songs and its almost like the 16 years she was gone didn't exist'.

And the group's flamboyant Lindsey Buckingham also heaped praise on their old new recruit, and promised there was plenty more to come from the classic line-up.

He said: 'There were a set of unknowns going into it and everything's just came back better than ever.

'It really feels very much like a beautiful profound poetic new chapter for this band. Its something thats going to go on for quite some time.'

Showman Mick Fleetwood, who founded the group alongside bassist John McVie and  legendary guitarist Peter Green back in 1967, could hardly hide his delight at the fact they are playing together once more, allowing them to rake in even more cash on the touring circuit.

The 67-year-old said: 'All of us are just overjoyed at this lovely lady's return to the ranks of Fleetwood Mac.'

The then Christine Perfect joined the group back in 1970, five years before their famed future guitarist and singer duo came into the band.

They played their first On With The Tour date on Tuesday, September 30th in Minneapolis and will be touring around North America until the end of March.

To see more on The Today Show performance including photos and video, check out this post