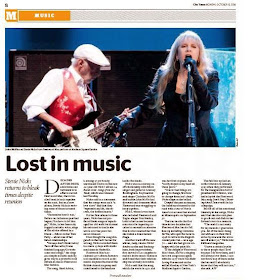 
DECADES AFTER DRUG addictions and turbulent love affairs scarred Fleetwood Mac, the reconciled band is back together on the road. But on a new album, Stevie Nicks is reviving some of those tortured times.

“Remember how it was/ Before our infamous past had begun/ You have to let him go,” Nicks, in her famously rugged contralto voice, sings of the advice offered by a friend — fellow rocker Tom Petty — about one of her failed relationships.

“He says don’t think twice/ Turn off the radio/It was finished long ago/Go write some real songs,” she sings as a simple acoustic melody gives way to a powerful rock refrain in classic Fleetwood Mac fashion.

The song, Hard Advice, is among 17 previously unreleased tracks on the now 66-year- old Nicks’ album 24 Karat Gold - Songs from the Vault, which was released last Tuesday.

Nicks said in a statement that the songs were each “a love story” and that they “represent my life, the secrets, the broken hearts.”

For her first album in three years, Nicks has not produced fresh songs or repackaged her old work but instead has returned to tracks she wrote over the years but never released.

Even though the songs lingered on the back burner for so long, Nicks recorded them in a mere 15 days with studio musicians in Nashville.

Fleetwood Mac’s acclaimed 1977 album Rumours took months to record as domestic disputes fractured the British-American group and contributed to the tensions inside the music.

Nicks was in a stormy onoff relationship with fellow singer and guitarist Lindsey Buckingham. Keyboardist and singer Christine McVie and bassist John McVie had divorced and drummer Mick Fleetwood was struggling to keep together.

Nicks, whose lovers have also included Fleetwood and Eagles singer Don Henley, later in her career became notorious for ingesting cocaine in amounts so massive that doctors warned her that she risked a brain hemorrhage.

Another track off the new album, Lady, relates Nicks’ doubts as she and Buckingham, both impoverished, first moved to Los Angeles to make it in the music business and found that their relationship was already in trouble.

Nicks said that the song, which she wrote in 1971 and was her first on piano, has “really stayed in my head all these years.”

“I know that things are going to change/ But how to change them isn’t clear,” Nicks sings on the ballad.

Despite the past acrimony, the band has returned to the road with a tour of North American arenas that started in Minneapolis on September 30.

The tour marks the first time in two decades that Fleetwood Mac has its full line-up including Christine McVie, who quit the band in 1998 to retire to the English countryside but — now age 71 — said she had grown unhappy with the quiet life.

To the delight of Fleetwood Mac’s fans, McVie is singing her own songs once again with the 1977 track You Make Loving Fun second on the setlist Monday at New York’s Madison Square Garden.

The full line-up had an earlier reunion in January 1993 when they performed for the inauguration ball of president Bill Clinton, who had adopted the Fleetwood Mac song Don’t Stop (Thinking About Tomorrow) for his campaign.

But for all of the emotional intensity in her songs, Nicks said that she does not plan to go all- out and dish on her former lovers in a memoir.

“The world is not ready for my memoir, I guarantee you. All of the men I hung out with are on their third wives by now and the wives are all under 30,” Nicks told Billboard magazine.

“I have a certain loyalty to these people that I love because I do love them, and I will always love them. I cannot throw any of them under the bus until I absolutely know that they will not care,” she said.