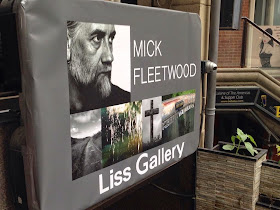 Mick Fleetwood is in Toronto ahead of Fleetwood Mac's show on Saturday night. He spent some time today at the Liss Gallery for interviews to promote his REFLECTIONS: THE MICK FLEETWOOD COLLECTION. This is an exhibition of original photographs taken by Mick himself.  The exhibit runs until October 31st.  So if you are in the area of 140 Yorkville Avenue, Toronto... Check it out!


CANADA AM
In Canada, Mick will be on CTV's Canada AM on Friday October 16th where the rock legend opens up about Stevie, the tour, his art and everything in between. Tune in at 8:30ET. 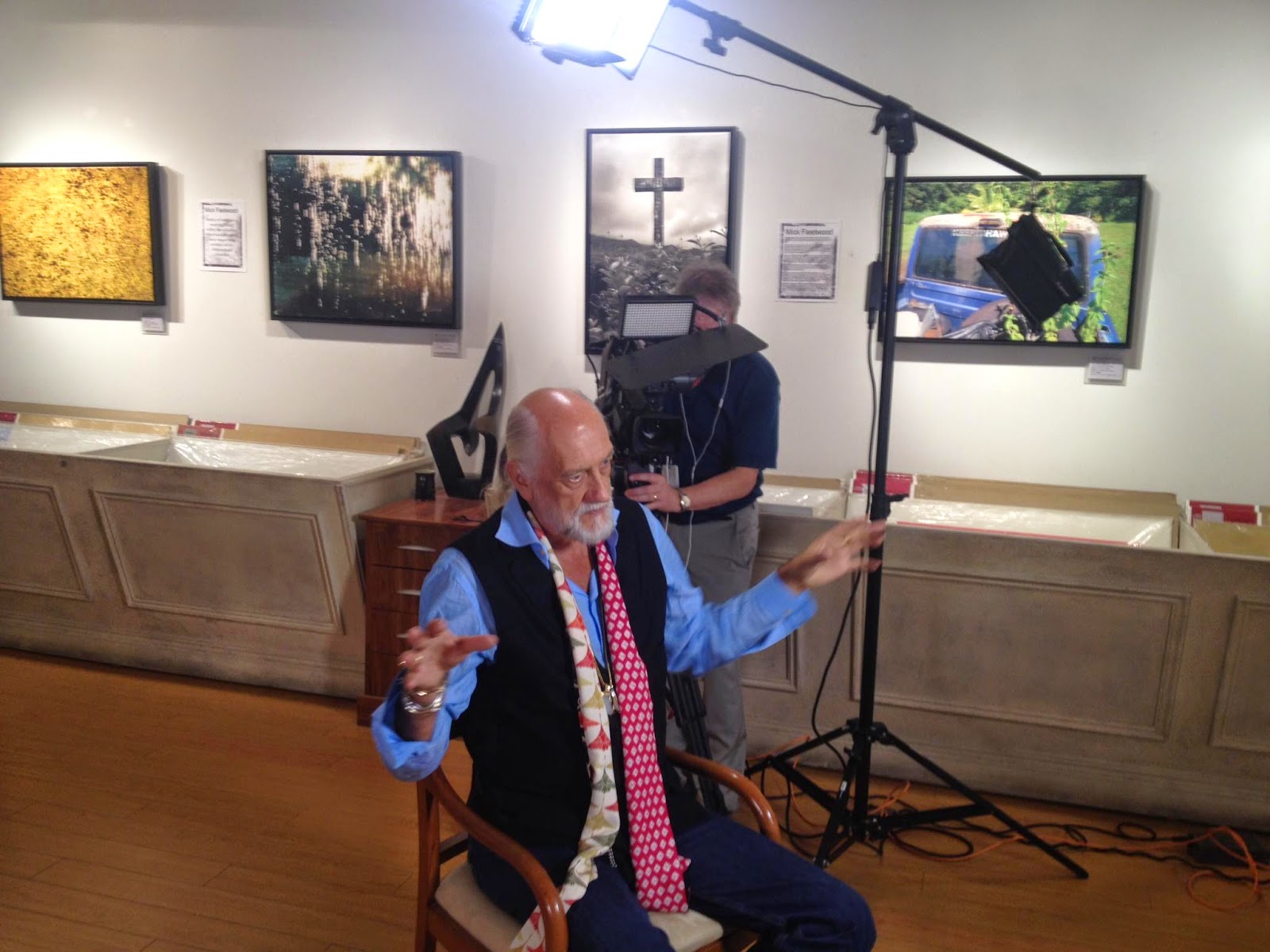 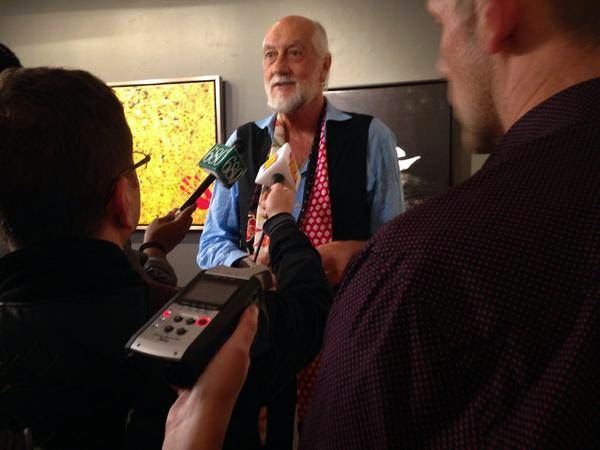 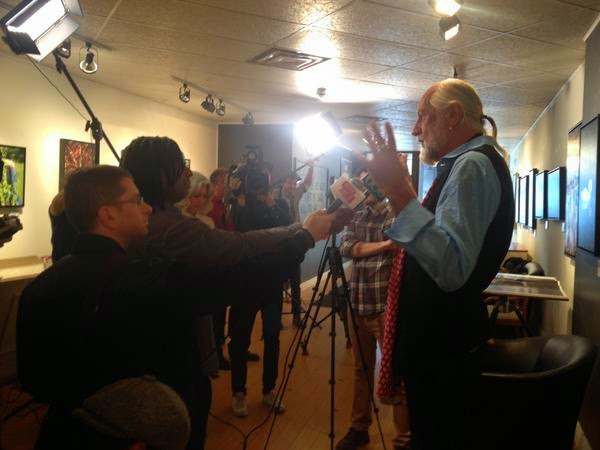 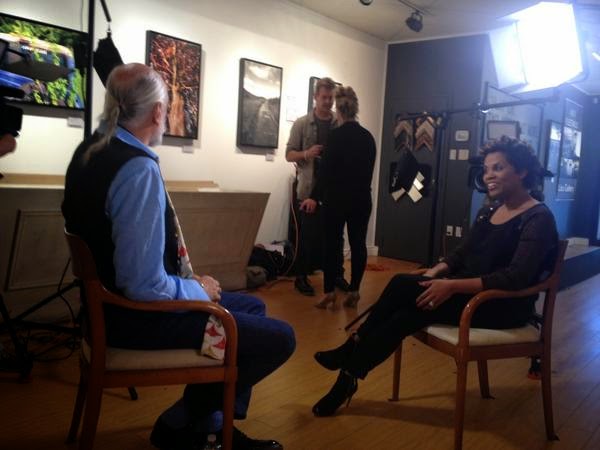 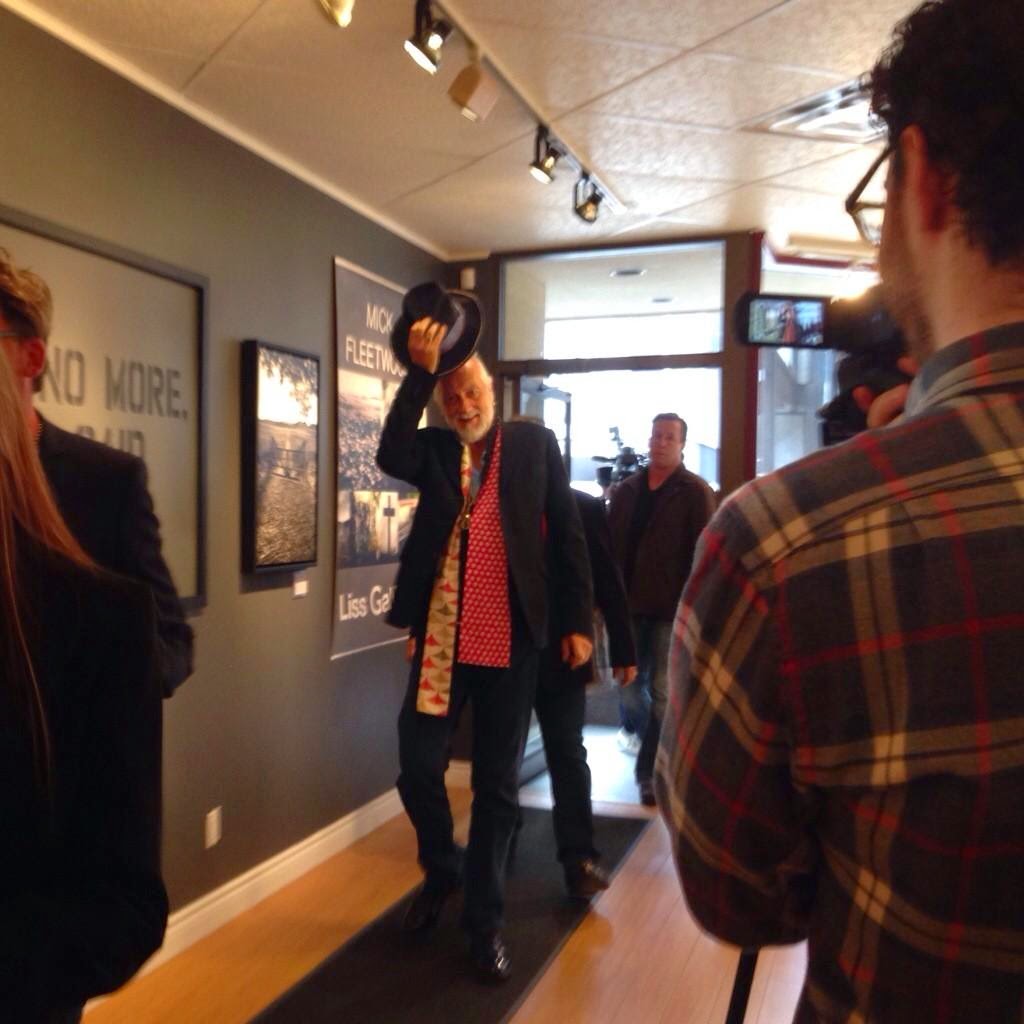 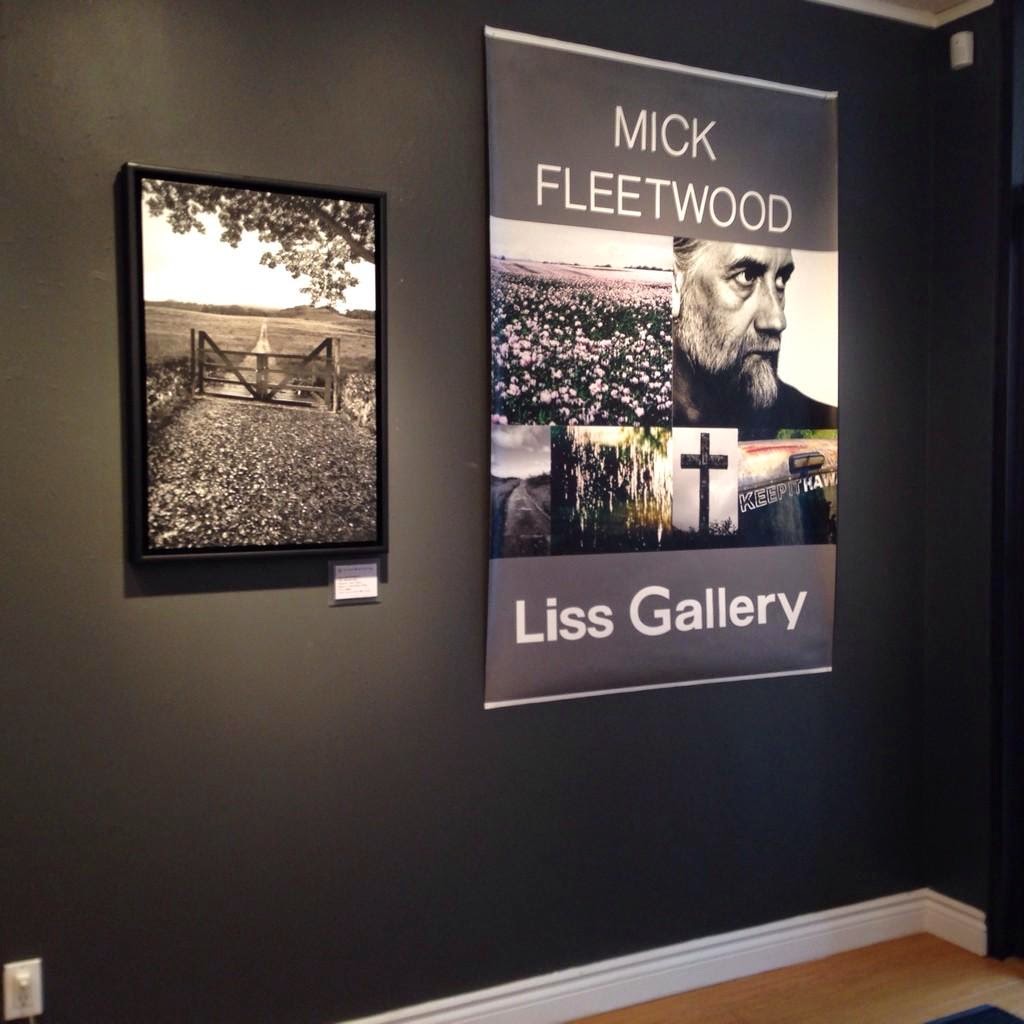 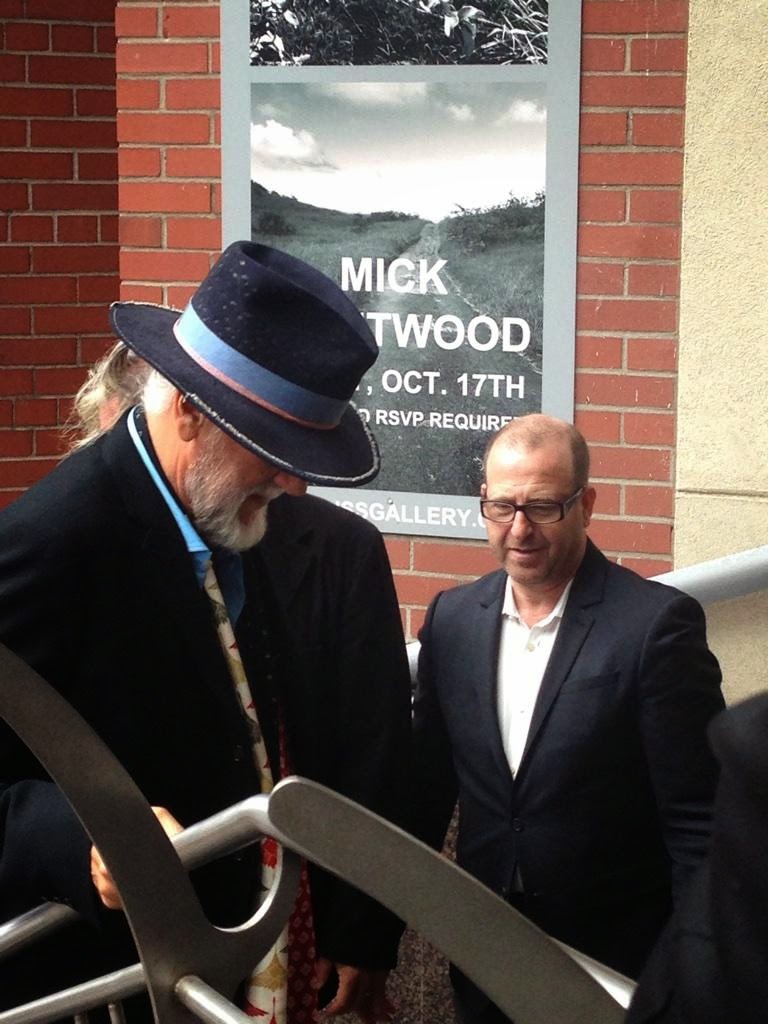 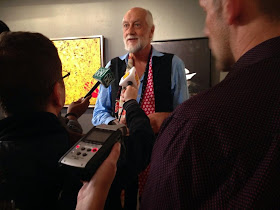 
"I'm what is known as a very busy bee," Mick Fleetwood says as he ponders his multidisciplinary schedule over the phone from New York City.

In the few short breaks that Fleetwood Mac's current tour – which features the newly returned and much-missed vocalist and keyboardist Christine McVie – offers, the drummer and backbone of the legendary rock group will be keeping his dance card full with a series of book store appearances to promote his recently released autobiography, "Play On."

And when he’s not doing that, he’ll be exhibiting his photography in a series of gallery shows across the continent. "Reflections: The Mick Fleetwood Collection" is currently showing at Toronto’s Liss Gallery. Fleetwood will be appearing at a private reception for collectors on October 17, the night before Fleetwood Mac’s Air Canada Centre show.

It would be a punishing schedule for a musician half his age, but the 67-year old Fleetwood isn't daunted by the prospect. Other than the current cold he's nursing, he figures he's in great shape.

"Outside of today, I think I'm blessed with being fairly fit and I take care of myself. And I don't like hanging around. I’m not good with it. I'm always twiddling my thumbs. So, in, theory I got what I asked for."

Besides, the work is keeping him happy as well as busy. Having the beloved McVie back with the group after a 15-year absence is as magical for Fleetwood and his bandmates as it is for their fans.

According to Mick, the tour is going "brilliantly. Totally Brilliantly. And with huge amounts of emotional gratitude. It's pretty amazing, the whole accumulation of all of these things that one could have never imagined a year and a half ago. It's been going just beyond anything one could have really wished for. The audience, you can tell, feel like a huge extended version of the way we're all functioning. Which is a state of just really genuine excitement as to what really is all happened here.”

Fleetwood is also thrilled to be taking his photography on the road with him. He's been taking pictures for decades. In fact, he was first turned onto the art form by fellow Fleetwood Mac member John McVie when the pair shared a house together in England. But it's only within the past few years that he's felt confident and accomplished enough to show his work.

"It took me a while to say 'I'm OK at doing this,'" he admits. But he was also like that when he started drumming. "Which is all probably to do with childhood and not being confident about presenting things. I was terrible at school, so I found things that I loved to do and started one step at a time. And that’s how I've approached this."

At one point, Fleetwood wasn't even particularly confident talking about his musical skills. "And then I realized that I was actually pretty good at drumming," he laughs.

He started showing his photography in his adopted home of Maui, and then branched out with a show in LA. Now he's jumping in with his current gallery tour, which he says will hit "about 10 or 12" different cities along the way.

The primary focus of his work, which blends more traditional photography with textural hand-painted enhancements, is nature. He’s willing to entertain the notion there’s a touch of environmental activism in his work, influenced by his life and friends in Maui.

"There’s a lot of work done on the island to keep it beautiful. And it really affected me. I do my best to go and surround myself with people who, quite frankly, were far more aware of ecology and all of those things while I was rocking and rolling my life out here."

There's also a deeply personal aspect to many of the photos, which he shot in England before his mother permanently left her home to join him in Maui.

"It was memories of something my mother was moving away from, at the grand old age of 90," he recalls. His mother is now 97, and can't see as well as she used to, but she still proudly displays some of his photos in her new home.

While the musician is touched by the response his work has received so far, from both his mom and others, he doesn't expect – or want – people to like his work just because of who he is in the musical world. He’s actually welcoming the fresh and unbiased response that comes with starting from scratch in a new medium.

"We know people love our music and we never take it for granted, but the risk factor with presenting something personal that you've done really put your nuts on the line, and I enjoy that part of it," he says. "The whole artistic creative process is about that, it’s about sharing and getting something out in the open. And the person who's presenting it, it actually gives them a new perspective on a lot of things. That you can function in a different world is exciting."

Fleetwood expects that his bandmate Stevie Nicks will get a similar level of enjoyment out of her 24 Karat Gold exhibit of Polaroid self-portraits, which will also be running during their tour.

"In the old days, me and Stevie were Polaroid freaks and she got really, really good at doing these time delay, funky, personal shots," he recalls. "And we would sometimes spend hours setting up a room with what she was going to wear or photographing a pair of ballet shoes. Back then it was weird, fun stuff we did on the road and now, to see it coming out so beautifully presented is so cool. I think she's going to have a lot of fun with it, as am I, to sort of be in another world. It’s a really nice thing."

Fleetwood says he's trying to talk Nicks into showing her paintings in the future. He'd also like to see some of McVie’s old shots from their roommate days in a gallery at some point.

And when he's not busy trying to talk his colleagues into joining him in the art world, he’ll be continuing to work on his own gallery shows. The current tour is, he's hoping, is only the beginning.

"I didn't know there would be such enthusiasm to tell you the truth. It's quite flattering. So we're just getting our feet wet, to see how it goes and apparently it’s going incredibly well.”

'Reflections: The Mick Fleetwood Collection' is at the Liss Gallery in Toronto until October 31. For more information, visit www.lissgallery.com