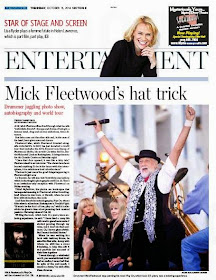 At 67, Mick Fleetwood has lived through what he calls “a whirlwind world”: the ups and downs of being in a famous band, drug and alcohol addictions, three divorces.

But he’s come out the other side and, in the case of the band, been given a second chance. Fleetwood Mac, which Fleetwood founded alongside John McVie in 1967, has just launched a world tour that includes the 1975 Rumours- era lineup of Fleetwood, McVie, his ex-wife Christine McVie, Stevie Nicks and Lindsey Buckingham. It brings them to the Air Canada Centre on Saturday night.

“Once that door opened, it was like a fairy tale,” Fleetwood said in an interview. “The shows have been beyond anything. To be in the house with that atmosphere, it is a whole new level of enthusiasm.”

The tour is just one of the good things happening to Fleetwood right now.

In Toronto, he will also visit Yorkville’s Liss Gallery, which is showing his photographs until Oct. 31. There is an invitation-only reception with Fleetwood on Friday evening.

Titled Reflections, the photos are landscapes that have special meaning to Fleetwood, either from England, where he was born, or Hawaii, where he now lives with his mother, who is 98.

And then there’s his autobiography, Play On, whose title refers to a line from Shakespeare’s Twelfth Night: “If music be the food of love, play on,” which is also advice he gives to fans about pursuing their musical passions. It’s being released Oct. 28. Writing the book, which took 21⁄ years, was a so 2 bering experience, he said. “I have lived a crazy life with mucho grando amounts of alcohol pouring through my veins, but I don’t do that anymore. Oh, I have a glass of wine. But I’m not the Mad Hatter.” When he was writing the book with Anthony Bozza, he asked his first wife, Jenny, with whom he still has a close friendship, to help him edit it and provide her account of their time together.

“I went through a whirlwind world, you went with it all. But I had no malice, I never had that. In spite of the end result, I meant no harm,” he said of his three divorces. There was no proper work/life balance and spouses were neglected, he said.

“I was a guy on a mission in a Walter Mitty world, naive truly.”

His photography, inspired by the work of American photographer Ansel Adams, has allowed him to be “calm, thoughtful.”

All of the photos are personal, said Fleetwood: “selfishly, they mean a damn to me.”

One, a road vanishing in the distance, causes him to ponder: “What are you doing with your life?”

Another photo, titled Medusa, is of a twisted tree outside his mother’s home in England that looks like “a lady’s body.”

“These are my songs,” said the drummer, who didn’t write songs for the band.

He connects one particular photograph to the revival of Fleetwood Mac, a picture of two swans. “Swans live for a long time, they are a lifelong pairing. Do you know how precious that is? My father and mother had a lifelong relationship. It’s a massive accomplishment,” he said. Being able to stand onstage again with Nicks, Buckingham and the McVies, “We had a second chance and we got it right, like those swans. It is a state of grace.” Their current concerts end with Christine McVie at a piano playing “Songbird,” the songbird returned. The group has been performing to sellout crowds and rave reviews. Despite past comings and goings, some of them rancorous, the band members have made their peace with the past, Fleetwood said, and are family again. “How cool is this?” laughed Fleetwood. “We got a second chance to have a higher form of friendship.”