Fleetwood Mac's Tour With, FINALLY, The Full Line-up Is A Welcome Return
Chicagoist.com


Fleetwood Mac's On With the Show tour was only into its second night last evening at Chicago's United Center, but the quintet of veterans—Mick Fleetwood, John McVie, Christine McVie, Lindsey Buckingham, and Stevie Nicks—already have a show that feels legendary. There are a few pacing issues and minor flubs but overall this is the complete line-up and show from Fleetwood Mac people have been hoping to see for decades. This is also the first tour to see Christine McVie back in the fold since 1998 and some of the evening's highlights were marked by the band's obvious delight to have her on stage with them again. For a band with such an incestuous past, much of whose legend is built on who fucked who and who did which drugs off the other one, it's truly remarkable that the quintet seems to actually like each other onstage.

Lindsey's out of the leather and back to the cropped jacket and it looks like Christine's complete outfits have changed for every show so far. 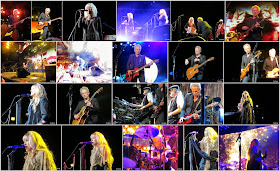 OVER MY HEAD (listen to the audience singing along)

I KNOW I'M NOT WRONG