Review: The return of Christine McVie remains a happy surprise to her band mates 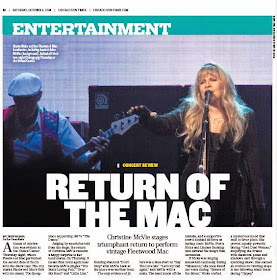 
A theme of celebration was evident at the United Center Thursday night, where Fleetwood Mac performed the second date of its On with the Show tour. The trip marks Fleetwood Mac’s first with its classic ‘70s lineup since supporting 1997’s “The Dance.” 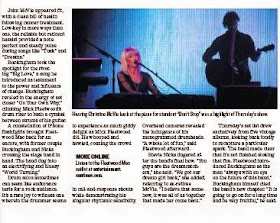 Judging by anecdotes told from the stage, the return of Christine McVie remains a happy surprise to her band mates. On Thursday, it meant that fans could again hear favorite McVie singles “You Make Loving Fun,” “Over My Head” and “Little Lies.” Hearing standout “Don’t Stop” with McVie back at the piano was another treat.

The only evidence of jitters was a false start on “Say  You Love Me.” “Let’s try that again,” said McVie with a smile. The band shook off the mistake, and a supportive crowd doubled its force as backup choir. McVie, Stevie Nicks and Lindsey Buckingham savored the song’s final harmonies.

If Nicks was singing somewhat cautiously during “Rhiannon,” she soon found her voice during “Sisters of the Moon.” Nicks crafted a mysterious mood that built to fever pitch. She proved equally powerful during “Gold Dust Woman,” amplifying the drama with theatrical poses and shadows cast through a sparkling shawl. She earned an ovation for twirling steps in her billowing black dress during “Gypsy.”

SAY YOU LOVE ME FALSE START
SISTERS OF THE MOON


John McVie appeared fit, with a clean bill of health following cancer treatment. Low-key in more ways than one, the reliable but reticent bassist provided a note-perfect and steady pulse during songs like “Tusk” and “Dreams.”

Buckingham took the spotlight for the riveting “Big Love,” a song he introduced as testament to the power and influence of change. Buckingham reveled in the energy of set closer “Go Your Own Way,” climbing Mick Fleetwood’s drum riser to bash a cymbal between strums of his guitar.

A constellation of iPhone flashlights brought Fleetwood Mac back for an encore, with former couple Buckingham and Nicks crossing the stage hand in hand. The band dug into an electrifying and bluesy “World Turning.”

Drum solos can sometimes seem like endurance tests for a rock audience. It’s a rare joy to witness one wherein the drummer seems to experience as much giddy delight as Mick Fleetwood did. He whooped and howled, coaxing the crowd in call-and-response shouts while demonstrating his singular rhythmic sensibility. Overhead cameras revealed the indulgence of his monogrammed drumheads. “A whole lot of fun,” said Fleetwood afterward.

Stevie Nicks lingered after the band’s final bow. “You guys are the dreamcatchers,” she said. “We got our dream girl back,” she added, referring to ex-retiree McVie. “I believe that somehow, it was all of us together that made her come back.”

Thursday’s set list drew exclusively from five vintage albums, looking fondly backward to recapture a particular spark. The band made clear that it’s not finished stoking that fire. Fleetwood introduced Buckingham as the man “always with an eye on the future of this band.” Buckingham himself cited the band’s new chapter. “It is going to go on for a long time and be very fruitful,” he said.