"THE VOICE"
"THE BATTLES PREMIERE"
NBC Monday's and Tuesday's 8/7c 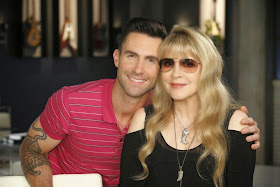 10/13/2014 (08:00PM - 10:00PM) (Tonight) : THE BATTLES BEGIN - THE COACHES ENLIST FELLOW MUSICIANS STEVIE NICKS, LITTLE BIG TOWN, ALICIA KEYS AND GAVIN ROSSDALE TO PREPARE THEIR ARTISTS FOR BATTLE - The "battle rounds" begin and the coaches enlist the help of the music industry's top recording artists to offer their knowledge and skills as advisers. Adam Levine teams up with Stevie Nicks, Blake Shelton with Little Big Town, Pharrell Williams with Alicia Keys and Gwen Stefani with husband Gavin Rossdale. In this phase, the coaches pit two of their own team members against each other in a dueling duet. After the vocal face-off, each coach must choose which artist from their team is the strongest, and has the option of stealing losing artists from an opposing coach. Each coach has two steals during the battle rounds where their artists will proceed to the new knockout rounds. Carson Daly ("Last Call with Carson Daly") hosts.