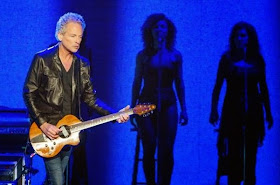 VANCOUVER -- So there was a missing piece. And her name is Christine “Perfect” McVie. 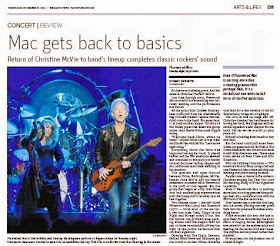 Last time through town, Fleetwood Mac was solid but something was certainly missing and the performance was forced.


All the guitar licks Lindsey Buckingham could pull from his considerable bag of tricks couldn’t replace that key third voice in the band. For many fans, it is keyboardist/singer Christine’s full bluesy pipes that make the group rather than Stevie Nicks nasal hippie twang.

“Welcome back Chris, where ya been?” chided Nicks and it was clear the jibe fell flat with McVie. “Let’s move right along.”

Everything about the show was improved having her back. It played harder and the five musicians seemed self-contained to the point you hardly noticed the three backup singers and two additional musicians standing in the shadows.

The quarrels and open discord between Nicks, Buckingham, McVie, bassist John McVie and the band’s namesake, drummer Mick Fleetwood, is the stuff of rock legend. But the group that began as a top-rank blues rock unit attained pop superstardom with this lineup and it certainly is at its best together.

Two albums alone ­— the self-titled Fleetwood Mac (1975) and Rumours (1977) — form most of the set list. A few hits from Tusk, Tango In the Night and Mirage round it out. But the quintet can probably keep packing arenas until the singers can’t hit any of those wonderfully off-key but right in-the-pocket harmonies that are their signature.

Opening with The Chain, Dreams, Second Hand News and Rhiannon got the crowd to its feet. When Christine took lead for a fast version of the hit Everywhere, things hit a highlight.

The love-in was on stage and off. Christine thanked her bandmates for having her back, Buckingham said her return signalled a new chapter for the band. Yet the set list was all 30-plus years old.

Nobody is holding their breath to buy new Mac.

But the band could pull some Peter Green-era gems such as Oh Well or The Green Manalishi into the set and most would think they were new. There were some jewels on Bare Trees and Kiln House too.

Who am I kidding? Just throw to TV’s American Horror Story using tried and true Fleetwood Mac tracks and skip any messing with the winning formula.

People came to dance in the aisles to Christine singing Say That You Love Me and sing along to Nicks’ signature Landslide.

Even if Fleetwood Mac is nothing more than a touring greatest hits package deal, it’s a revitalized one with the full force of the five musicians.

How interesting to see that this long into its career, putting that key piece back into the puzzle still makes everything better.

Nicks sounded the best she has in ages freed from shouldering the lion’s share of singing duties. Buckingham was reined in on the endless solos and fleshing out the set list with solo tunes. The rhythm section pulsed rather than shuffled.

No surprises, but the pleasant one of a band in flight.