Stevie Nicks Stays Gold... And she power naps! “Naps are the new cocaine.” 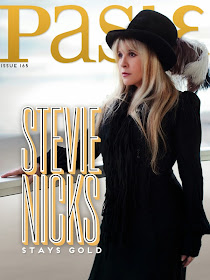 
Multiple-Grammy-winning Rock and Roll Hall of Famer Stevie Nicks has soaked up a lot of wisdom over her 47-year career. But she can’t help chuckling over the prescient accuracy of knowledge passed down from legendary hard-partying L.A. guitarist Waddy Wachtel, who worked with her on 24 Karat Gold – Songs From the Vault, her stellar new collection of previously unrecorded originals, dating from 1969 to 1995. His hilarious quote? “Naps are the new cocaine.” “And it’s so true, it is sooo true!” she purrs, phoning one recent afternoon from her oceanfront Los Angeles home. “And you know what? I was going to take a power nap today, and we forgot that we had to talk to you. So I said ‘Okay—no power nap today!’”

As a kid, adds the singer, 66, her own mother would catnap daily: “And I used to think ‘That is so stupid—you’re going to go lay down for 35 minutes?’ And she’d go ‘Yeah, but it changes your life!’ And when we were younger, we would never have thought that that would have helped. But it does. So I do that, too. And about five o’clock every day, I start going ‘Okay—I need to lay down.’ And people look at me like, ‘Really?’ And I’m like, ‘No. Seriously. I need to go lay down and be away from all you people for 30 minutes to an hour. So I am disappearing now.’”

As interviews go, not a bad way to start. Your subject is awake and ready to talk. Groggy, perhaps. Maybe just a tad resentful. But definitely eager to discuss the current renaissance that’s sweeping through her life and rocketing her back onto the pop-cultural radar.

Continue to Pastemagazine.com for the full interview