The group is scheduled to perform in downtown Phoenix Wednesday evening.

Fleetwood said displaying his art can sometimes be more nerve-wracking than performing on stage.

"I don't write songs, and I don't sing them. I play in a band and it's a lot of work one way or another, but this more personal for me," Fleetwood said. 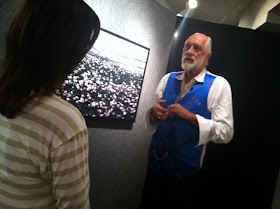 Before he gets an arena full of people going Wednesday night, he's showing his talents go beyond the stage.

"When I became a drummer, I sort of was doing what we did as a family. We traveled all the time, and I was the boring snapshot-taker in the band," Fleetwood said.

He admits his photographs in the collection Reflections are not what people might expect. They show moments of calm, either in his birthplace of England or his new home in Maui.

"I understand they were probably expecting ladies hanging off chandeliers and things," Fleetwood said.

"The contrast in this photo between the old rusty worn-out truck, and this new burst of super green light from the leaves," said Scottsdale resident Sari Lewis, describing what drew her to the piece she purchased.

She said she's not surprised he chose the Valley as one of his first exhibitions in the states.

"Scottsdale has an awesome gallery district, and we earn and deserve a lot of great art here," Lewis said.

As for his favorite piece? Fleetwood prefers a pair of swans he photographed individually that he said remind him of his parents because swans mate for life.

"In a way, these are my babies," Fleetwood said.

If you'd like to take a look at the pieces, they'll be on display until Thursday at DeRubeis Fine Art of Metal.


PHOENIX (KSAZ) - It's been 16 years since every original member of the legendary group Fleetwood Mac performed and toured together.

They are one of the greatest Rock and Roll bands of all time, selling over 100 million albums.

On Wednesday night the band will be rocking U.S. Airways Arena, but first tonight FOX 10 caught up with drummer and founder of the band Mick Fleetwood at a gallery in Scottsdale.

Fleetwood's other passion besides music is his photography.

For such an imposing figure, Mick Fleetwood is 64, and he's an incredibly gentle, thoughtful, soft spoken man.

"I still have periods where I take a lot of pictures and think about it a lot, this is the sum of what I've taken," said Mick Fleetwood.

He's still following the path, in music and photography.

"And then I joined a rock and roll band many years later, and was the boring member of the band who took pictures all day long," he said. Then at night he would take his place behind a great band and was hardly boring. "We have affected people, and people love our music that still exists."

He says the band is still relevant today for one reason; they all love making music.

"They would truly be doing music with or without the money; it was nothing about being successful," said Fleetwood.

People always ask him whether he'll release something like "Life on the Road with Fleetwood Mac" , he says he doesn't think so.

In less than 24 hours from the airing of this story, he will play in front of a sold out crowd. So how does Fleetwood keep his mind on photography? "I don't get overly thinking about it until I get to the show and get in the complete routine... you would have brought up that I suffer from stage fright, so you've actually triggered me already, I'll be drinking heavily tonight!" he said.

For the first time in 16 years, Christine McVei is back touring with the band so the lineup that produced "Rumours" , one of the best selling albums of all time, is back together.