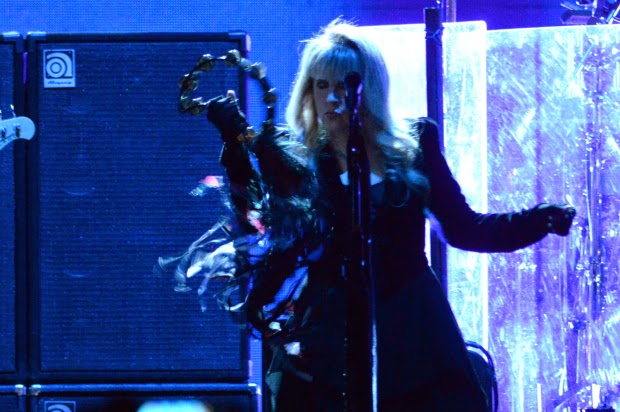 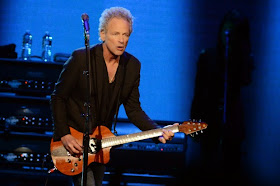 "Our songbird has returned," Mick Fleetwood told the sold-out crowd at US Airways Center Wednesday night before the reunited "Rumours" lineup treated the fans to an encore performance of "Don't Stop" that featured the songbird in question, Christine McVie, taking a turn on lead vocals and contributing a rollicking piano solo. 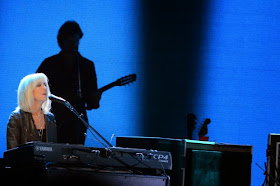 This is McVie's first tour with Fleetwood Mac since 1998. And Fleetwood was far from alone in viewing her return as cause for celebration, reuniting as it does the soft-rock icons' most successful lineup. The crowd responded with enthusiasm when she took her first lead vocal, two songs in, on "You Make Loving Fun," which was followed by a heartfelt tribute to McVie by Stevie Nicks.

McVie herself talked about "what a thrill it is for me to be standing on this stage singing with these amazing musicians and friends" before taking another lead vocal on "Everywhere."

Lindsey Buckingham shared his thoughts on how "the return of the beautiful Christine" had signaled a new chapter in their history.

And the second encore started with McVie alone on piano and vocals for two verses and a chorus of an understated "Songbird" before Buckingham joined in on lead guitar.

That was it for the music, but Nicks returned to share a charming anecdote about a phone call she got last October in Italy, imitating McVie's British accent to ask, "What would you think if I decided to come back to the band?," ending her speech with "We so wanted her to come back. And we're so happy to have our girl back."

They did a lot of talking in the course of their nearly three-hour performance. Buckingham talked about how thrilled he was to be in Phoenix, where he and Nicks had spent a lot of time, saying "It kind of feels like a second home." He gave a lengthy monologue before tearing it up on a solo acoustic performance of "Big Love," talking about how although that "Tango in the Night" track is actually newer than much of the material in Wednesday's set, it feels like it came from "a whole different lifetime," before he "pulled back and made a few adjustments." The song began, he explained, as "a kind of contemplation on alienation perhaps" but had become "more a meditation on the power and the importance of change."

Several songs from the show, including full songs of Landslide, Go Your Own Way, and Silver Springs

And Nicks talked at length about living in Phoenix.

"I actually lived here for 20 years," she said before admitting that she wished she hadn't sold her house. "I miss coming home to write and being near Camelback Mountain and all of you." After acknowledging her dad and other friends and family in attendance, Nicks said, "A lot of our songs were written here. It's Good to be home."

As for the music, they made their way through nine of the 11 songs on "Rumours" and half the songs on 1975's "Fleetwood Mac," their first release with Buckingham and Nicks.

Fleetwood set the tone for their performance with the thumping kick dream of "The Chain," the first of several tracks that thrived on Buckingham's intensity both as a singer and as one of rock and roll's most underrated lead guitarists. They kept the focus on "Rumours" as they traded off lead vocals from McVie on "You Make Loving Fun" to Nicks on "Dreams" and back to Buckingham for "Second Hand News."

Highlights of the early part of their performance included "Rhiannon," an electrifying "Tusk," "Say You Love Me" and "Seven Wonders."

Buckingham's solo performance of "Big Love" was exhilarating and far more intense than you'd imagine one man on acoustic guitar can be -- unless, of course, you were familiar with Buckingham's solo performances of that awe-inspiring song. They kept things in acoustic mode for "Landslide," which featured Buckingham accompanying Nicks on her best vocal of the night. And then he took it up a notch with a haunting performance of "Never Going Back Again."

At that point, their bandmates returned for a stripped-down set with Fleetwood on a kit out front for "Over My Head" and "Gypsy," which was set by another lengthy monologue from Nicks about a San Francisco dress shop called the Velvet Underground.

The set built to a climax from there with McVie's "Little Lies" giving way to a haunted arrangement of Nicks' "Gold Dust Woman," Buckingham's most insane guitar work of the concert on "I'm So Afraid" and a set-closing "Go Your Own Way."

After starting the encore with a version of "World Turning" that featured a lengthy drum solo, they brought things up a notch with "Don't Stop," ending that first encore with an aching "Silver Spring" (the B-side of "Go Your Own Way") with a really nice vocal from Nicks. And saving "Songbird" for the second encore was a nice touch, shining the spotlight one last time on the prodigal daughter, McVie, whose return really does suggest, as Buckingham said, a new chapter in their history.
Nickslive at Thursday, December 11, 2014
Share