Fleetwood Mac has never been considered a “fun” band.

Between the tempestuous relationships among its members and the differing opinions about musical direction over the decades, the collective of Mick Fleetwood, John McVie, Stevie Nicks, Christine McVie and Lindsey Buckingham was never the cheeriest bunch.

But wow, did that drama make for some amazing music.

The band returned to the road in October after taking some off late last year for John McVie to combat cancer, and this time they had a secret weapon that has elevated Fleetwood Mac to a new level of vitality – Christine McVie. 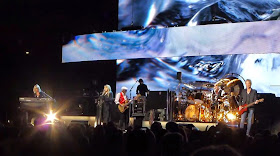 Back with the gang after a 16-year gap, McVie, an unbelievable-looking 71, injected a palpable energy into the band, both by allowing them to further open their songbook and by providing Nicks with her perfect female vocal foil.

When was the last time you heard Nicks girlishly squeal, as she did when welcoming McVie with an enthusiastic, “She’s baaaaaack!”? For that matter, when was the last time Mac fans heard “You Make Loving Fun” and “Everywhere” played live (OK, it was 1997’s “The Dance” tour, but you get the point)?

From the moment Mick Fleetwood ushered in the band’s standard opener “The Chain” with his heartbeat bass drum, to more than 2 ½-hours later when McVie closed the show with her tingly “Songbird,” the show felt fresh and alive and yes…fun.

The sold-out crowd at Philips Arena Wednesday night erupted into cheers for McVie before the complete opening phrase of “You Make Loving Fun” –  “Sweet wonderful you” – exited her mouth, setting the appreciative tone of the night.

Of course, the other major benefit of McVie’s return is her contributions as a vocalist. She added another layer of harmony to the silky “Dreams,” steered the sunshiny “Everywhere” and helped “Rihannon” breathe as Nicks donned a black shawl to drape over her jagged-edge black dress as she sang an invigorated version of the song.

While the female energy on stage resounded mightily, that isn’t to diminish the continued awesomeness of the band’s tortured musical genius, Buckingham.

Whether bouncing on the balls of his feet during “Second Hand News” or unleashing primal yells during “Tusk” – the band’s most polarizing song that was balanced by Fleetwood’s unrelenting beat and Christine McVie on accordion – the Twizzler-thin Buckingham was a riveting presence who sounded robust after shaking off some initial hoarseness.

And what a hoot that at 65, he still has groupies who basked in his aura at the front of the stage and even requested a couple of his onstage towels.

By giving fans a well-paced, 24-song set, Fleetwood Mac was able to liberate its extensive catalog and demonstrate the differing tones each member brings to the forefront.

McVie’s sweet pop tendencies soared on “Say You Love Me,” Buckingham tore off a finger-blistering solo during “Big Love” that almost sounded symphonic and Nicks twirled and grinned during her ethereal “Gypsy,” after sharing a lengthy – yet interesting – story about its origin.

For a certain generation of Fleetwood Mac fans, the moments between Buckingham and Nicks prompt the greatest pangs of wistfulness. The twosome didn’t disappoint as they stood alone on stage for “Landslide,” with Nicks’ warble sounding poetically perfect and Buckingham’s gentle guitar strains lovely as always; the pair then stayed together for a hushed duet on “Never Going Back Again.”

With the full band back onstage (not that Buckingham ever leaves it), the easy-going, hip-shaking “Little Lies” led to Nicks’ defining moment of the show. She absolutely smoldered with sensuality as she snaked through “Gold Dust Woman,” saturating the song with an intensity not heard from her in years (the band’s 2013 appearance at Philips featured some fantastic moments, but none compared to this).

Eternal fan favorites “Go Your Own Way” – featuring Nicks in her traditional black top hat – and “Don’t Stop,” their anthem of cheerful optimism, provided the show with a final jolt, as did Fleetwood’s fluid drum solo in the middle of “World Turning.”

It’s almost a relief to know that Fleetwood Mac will be back at Philips Arena in March, because who wouldn’t want to see one of – if not the – best concert of the year one more time?

Yep, yesterday’s gone indeed and a new Mac has been born.