Fleetwood Mac at the Pepsi Center in Denver 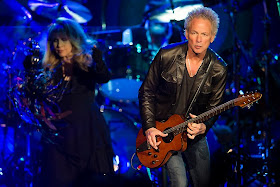 
Christine McVie always performed stage right with Fleetwood Mac, though she was never a side player. The keyboardist wrote a good number of the band’s hits back in the day and took the position of lead singer whenever they came into rotation.

More than that, she was the supergroup’s third leg. Lindsey Buckingham was the rocker, Stevie Nicks the spiritual siren and McVie the pop songstress who brought a head-bopping bounce to the band’s sound with numbers like “You Make Loving Fun.” That combination gave Fleetwood Mac something for every prevailing taste in the 1970s and pushed it to the top of the charts.

And so when McVie retuned to the band after a 16-year vacation this fall, she brought not just her 71-year-old self, but also a little more easy-going fun. Fleetwood Mac’s appearance at the Pepsi Center in Denver Friday night felt much more like a pop concert than the raucous rock show it performed there in 2013.

Continue to the full review (+ 20 photos) at Heyreverb.com