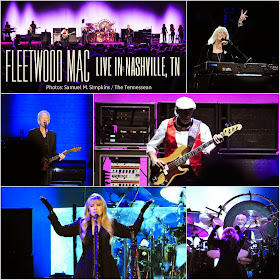 Perhaps more than your average arena rocking act, Fleetwood Mac's reputation precedes them. There's the infamous backstory to their album "Rumours," made as several romantic relationships within the band were falling apart. There's also a mountain of classic tunes from that album and others – song titles that immediately leap to mind upon hearing the band's name.

But here's what Fleetwood Mac got to remind the sold-out crowd of at Nashville's Bridgestone Arena on Wednesday night: Fleetwood Mac is a band. A real band, and a remarkably powerful one, 40 years after they first became massive stars.

Sure, they've got a few side musicians and vocalists filling out the sound in the wings, but it was 67-year-old drummer Mick Fleetwood alone that was rattling the seats with his rhythms. Bassist John McVie (the other half of the band's namesake) laid down the thick foundation, guitarist and vocalist Lindsey Buckingham shredded and howled with glee, and frontwoman Stevie Nicks presided over the whole scene with a cosmic cool.

And what really made the set complete was the return of Christine McVie, the keyboardist, vocalist and songwriter who had been with Fleetwood Mac through their heyday. She returned to the band last year after a 16-year absence.

"In the beginning (of the tour), what I would say would be 'Welcome, Nashville, and welcome back, Chris,'" Nicks told the crowd. "…but now, at show number 66, I think we can positively say she's back!"

While it was heartwarming to see her back in the fold on "Little Lies" and to see that Fleetwood and Buckingham still pack a punch, for the bulk of the audience, the show still belonged to Stevie.

All it took were the opening strains of "Dreams," "Gold Dust Woman" or any other tune she took the lead on, and the room was back on its feet. She also provided a few candid moments in what seemed like a very, very tightly scripted show.

Before she and Buckingham played "Landslide," she recalled their musical life before joining Fleetwood Mac: as the duo Buckingham Nicks. They released a debut album in 1973, which she said "started to simmer" across the south.

"It started to do really well in Birmingham, Alabama, right when we were joining Fleetwood Mac. Had we not had Fleetwood Mac, we may very well have ended up here (in Nashville). And I think about that sometimes. We could have just as easily gone towards country music as towards serious rock and roll music, which is what we did. We could have very well ended up living here with 15 children and grandchildren, and being these two rock and roll people that ended up country people."

Instead, she and the rest of her band have had to settle for the cards they were dealt: wrapping up a sold-out arena concert with a couple of room-wide singalongs: "Don't Stop" and "Silver Springs." Those crowd-pleasers came after a half-hour slog of extended jams and solos, which certainly had their moments (Buckingham's shredtastic solo had the audience in full "Wayne's World" we're-not-worthy mode), but also a good chunk of filler.

Perhaps the band of serious players simply wanted to bring their A-game to Music City.

"I think we're more nervous about tonight than we were for Madison Square Garden, or the Forum," Nicks told them at one point. "I don't know why, but it's something."