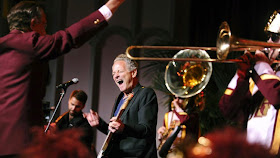 After a Q&A session in USC's Bovard Auditorium, Buckingham and the Trojan musicians tore through USC favorite "Tusk," followed by "Go Your Own Way," to the delight of the students in attendance and the parents they brought along.

"Tusk" has long been associated with the private school, with brass chords as familiar to USC devotees as the university's actual fight song. The original 1979 version was recorded with the USC band at Dodger Stadium and has been a game-day staple since.

Leading up to the short performance, Buckingham answered questions from David Belasco, a professor at USC's Marshall School of Business. Throughout, Buckingham sprinkled in solo acoustic renditions of "Never Going Back Again," "Bleed to Love Her" and "Big Love."

The event was part of Belasco's USC course "The Leap," a series of discussions with business leaders and innovators about the "entrepreneurial mindset." Guests have included Quincy Jones, Pete Carroll and Jessica Alba.

But the Buckingham visit was less about straight-ahead business advice than the successes and setbacks of the rock star's long career. Still, he did deliver some wisdom about maintaining artistic credibility in the face of commercial pressures and public expectations.

He cited the creation of the double-album "Tusk" -- the far less commercially successful follow-up to "Rumours" -- as an example.

"What happens with artists, or people who start off doing things for the right reasons, is that you slowly start to paint yourself into a corner by doing what people outside of the creative world are asking you to do, and I think that's antithetical to being an artist," he said.

"['Tusk'] is my favorite album of all these albums, because of the reason it was done," Buckingham said. "It started me down the path I still try to aspire to, which is to be an artist and not just a craftsman who is doing business." 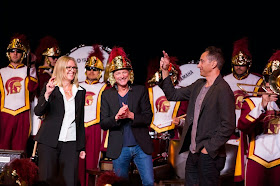 Lindsey Buckingham, the guitarist of the renowned ’70s band Fleetwood Mac, took a break from the band’s tour to speak to a packed crowd in Bovard Auditorium on Wednesday night.

Fleetwood Mac is best known for its Grammy Award-winning album Rumours which was released in 1977.

At USC, however, Fleetwood Mac is best known for having recorded the song “Tusk” alongside the Trojan Marching Band.

Upon introducing Buckingham, Belasco remarked that that night was special because it was all about the USC family and the experiences they share.

Taylor DuPont, a sophomore majoring in business administration, said that she attended the event because Fleetwood Mac was an important part of her childhood.

“Fleetwood Mac is my favorite band. I grew up listening to them and continue to do so. When I found out that Lindsey would be on campus, I jumped at the opportunity of seeing him talk and play,” she said.

During the talk, Buckingham discussed his youth, how he met his bandmate and former lover, Stevie Nicks, and how he came to join Fleetwood Mac.

He then discussed the success of Rumours and how it was also a difficult time for the band members because their romantic relationships were disintegrating.

“At the very least, emotional experiences will only broaden your creative landscape,” Buckingham said.

After every topic, Buckingham performed a song related to it. Among them were “Never Going Back Again,” “Bleed to Love Her” and “Big Love.”

For every song that he performed, he received a standing ovation from the audience.

Because of Fleetwood Mac’s unique connection to USC, Buckingham also discussed how Fleetwood Mac came to collaborate with the Trojan Marching Band to play “Tusk.”

“We wanted something that would sound like a jungle roll and hypnotic. How Bartner got in the picture, I don’t know. Maybe Mick?” he said, referring to the band’s drummer.

A video from USC’s archives that showed the day that “Tusk” was recorded at Dodger Stadium was shown. Belasco explained that through “Tusk,” the Trojan Marching Band was able to set two unique records, one for the first collegiate marching band with a Grammy-winning record and one for the most musicians collaborating on one single.

Following the talk, students asked Buckingham questions. He provided them with advice regarding the definition of success.

“I was never really [goal-driven]. I was focused, but not necessarily trying to do anything for anything other than my own success,” Buckingham said.

The talk ended with Buckingham performing “Tusk” and “Go Your Own Way” with the band.

Earlier in the talk, Buckingham said the work of Fleetwood Mac has been able to reach such a wide array of generations.

“We have gotten teenagers whom our body of work seems to make sense to,” Buckingham said.

Students said after the event that they were very pleased with Buckingham’s talk and performance.

Jake Simon, a junior majoring in business administration, said that he felt very fortunate to have been able to attend.

“I was in the second row and it was beyond incredible,” he said.

Cristina Gomez said she was impressed by the uniqueness of the event.

“This was like a personal concert for ourselves along with stories. It was so impressive!” she said.

At the event, the Lloyd Greif Center awarded Buckingham with a trophy that recognized his contributions to the university, as well as his musical entrepreneurship.