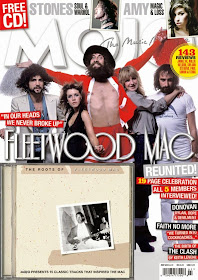 “Come Back But You Can’t Leave Again!” Fleetwood Mac Speak

On the eve of Fleetwood Mac’s return to UK concert venues – the classic line-up fully quorate for the first time since 1998 – MOJO magazine delivers astonishingly candid interviews with all five members. The free covermount CD is also Mac-themed as we delve into the roots of the band to deliver 15 seminal blues and pop recordings by Elmore James, Howlin’ Wolf, Little Walter, Buddy Holly and more. Also in the new issue: Amy Winehouse, The Rolling Stones, Faith No More, The Clash, Donovan, XTC, Emitt Rhodes, Ben E King, plus the usual superabundance of great features and definitive reviews.

FREE CD! THE ROOTS OF FLEETWOOD MAC
MOJO presents 15 classic tracks that inspired this month’s cover stars. Delving deep into the blues, just like the Mac did as they set their musical foundations, we present classic cuts from Robert Johnson, Elmore James, Howlin’ Wolf, Buddy Holly and more…

Fleetwood Mac All five members of the band speak exclusively to MOJO as Christine McVie rejoins the band after 17 years. Featuring…

EVEN FOR A band who have experienced more than their fair share of intrigue, drama and line-up turmoil, Christine McVie’s return to Fleetwood Mac may be the most extraordinary turn-up yet.

Ahead of enormous UK shows and even (whisper it) a new album, all five members of the band have elected to speak to MOJO in a series of individual interviews tackling the entirety of their career.

Plus the free, 15-track CD that comes with the magazine traces Fleetwood Mac’s roots through a series of classic blues and rock’n’roll recordings, including songs from Buddy Holly, Robert Johnson, Elmore James and more.

The new issue of MOJO (July 2015 / #260) will be on sale in the UK from Tuesday (May 26). But first, here’s a taster of some of the things Fleetwood Mac are getting off their collective chests:

Christine McVie on her Fleetwood Mac exile…
“I never listened to a Fleetwood Mac record the whole 16 years. If something came on the radio I’d turn it off. Not that I didn’t love the music, I just denied myself the pride of having done something that great. I felt I didn’t deserve it or something. This is like talking to my psychiatrist!”

Lindsey Buckingham on why Christine’s return was a gamble…
“It’s interesting. We really were doing fine as a four-piece. When Mick called me and said, ‘I’ve been talking to Christine and I think she’s…’ You know, on paper it was great but you never know how these things are going to play out. I called her up and said, ‘Chris, I think it’s a great idea, but you do know that if you come back you can’t leave again!” She was coming from this place that’s all about how she’s feeling about her life, and she realised how much she’s missed this. That doesn’t necessarily mean she was ready for 80 shows in the States, much less everything else we’re doing, so we took it step by step… One thing that was really key was that she had some rough ideas for new songs.”

John McVie on the group’s moth-like attraction to intra-band drama…
“It wasn’t conscious. The main thing was to keep playing the music. It wasn’t as if we were saying, ‘Let’s have an argument and something edgy will come out of it.’ It was never like that, far from it.”

Stevie Nicks on why they’ll never escape their past…
“It was totally important and everybody is still writing about everybody else. It will never stop. Once you have that, even long after the couples are broken up, you still have that – when you sit down to write a couple of songs, that news from 100 years ago still creeps in.”

And Mick Fleetwood on why this reunification will be the final Fleetwood Mac line-up…
“This is it, to me. Emotionally, if you think of the enormity of what has happened, the surprise of what has happened, the doors that have opened to be walked through… If you were writing a book, you’d go, ‘Isn’t it a shame I can’t end it like this?’ We’ve had the chance to end it like that and I wouldn’t dream of it any other way.”
Nickslive at Saturday, May 23, 2015
Share