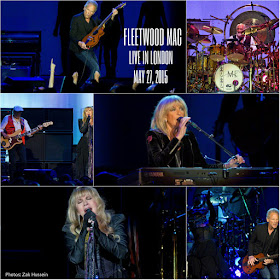 
Fleetwood Mac's Stevie Nicks dedicated the song 'Landslide' to Adele on the opening night of the band's UK tour.

The group played the first of a run of shows at London's The O2 last night (May 27), with Nicks addressing the crowd mid-set to talk about her love of British singer, Adele. "She's from here - you might know her," commented Nicks. "She's a fantastic songwriter... I told her 'you're going to be me in 40 years, you're going to still be up onstage doing what you're doing because of your songwriting'." The song 'Landslide' originally featured on the band's self-titled 1975 album.

Fleetwood Mac were joined by keyboard player and songwriter Christine McVie, who is now a full-time member of the band again, after first appearing on stage with the group at the same London venue in September 2013 before officially rejoining in January 2014. McVie - who wrote some of the band's most well known songs - left the band in 1998.

The band arrived onstage at 8:15pm and played a 22 song, hit-packed set to a sold out crowd. Opening with 'The Chain', it was followed by 'You Make Loving Fun' after which Christine McVie commented: "Thanks very much London, it's great to be here." Stevie Nicks then explained that it was the 82nd show of their current tour. "And now on show 82 I think we can safely say that our girl is back!," she added, gesturing to McVie.

Following 'Rhiannon', McVie addressed the crowd once more. "I can't tell you what a thrill it is to be on the stage with these wonderful musicians who I consider my family," she said. "You don't get this chance many times in life - I got it twice." The band then started a mass sing-along with 'Everywhere'. Guitar player Lindsey Buckingham later spoke about "the return of the beautiful Christine" and called it "a karmic, circular moment".

Later, for the songs 'Over My Head' and 'Gypsy', drummer Mick Fleetwood swapped his large kit for a smaller one at the front of the stage, which Christine McVie referred to as a "cocktail kit". During 'World Turning' he embarked on an epic drum solo, much to the delight of the crowd. "Shit, this is a huge, massive place," he remarked towards the end.


The soap opera of the band member's personal lives has always lent a certain depth and texture to Fleetwood Mac, says Neil McCormick.

The Chain made for a suitably dramatic opening, showing off the restored Fleetwood Mac to full effect with that fantastic bass, thunderous drums, blood quickening guitar solo and gorgeous wall of harmonies insisting the chain cannot be broken. Going straight into You Make Loving Fun drove the point home, showcasing Christine McVie's smooth vocal and funky keyboards. "I think we can safely say our girl is back" trilled Stevie Nicks.

This tour marks the full reunion of the classic line-up, with the return of Christine McVie after 16 years. The band have become almost the definition of a heritage act in her absence, regularly touring sets of their greatest hits to nostalgic audiences, so you can't really say she was missed. But there is no doubt she restores some balance, both in musical and pop cultural terms.

Musically, she takes some of the weight off virtuoso guitarist Lindsey Buckingham, her smooth, lush pop songs softening his sharper arty edges. Flowing gems as potent as Everywhere, Little Lies and Songbird were restored to their rightful place in the centre of a Fleetwood set and for that alone audiences have reason to be grateful. But there is a sense too that the dysfunctional family is back together, healing old wounds with the balm of time and music, a message that, in itself, speaks volumes to lifelong fans.

Fleetwood Mac make much of their history of "ups and downs" as Buckingham puts it. Now that Christine is back playing again with ex-husband bassist John McVie there are three former couples on stage, if you take into account that drummer Mick Fleetwood romanced singer Nicks behind the back of Buckingham. "What doesn't kill you makes you stronger," Buckingham insisted, and seemed intent on proving it with a playful yet dramatically full blooded duet with his ex on Never Going Back Again.

The soap opera has always lent a certain depth and texture to Fleetwood Mac but, frankly, a little less chatter and a little more playing would be my only suggestion. There were speeches even after the encores. Yet it feels churlish to complain. Precious few bands have contained the range of vocal, stylistic and songwriting talent of the Mac, and even the inevitable inclusion of a new song didn't start a queue for the toilets. With that taut, explosive rhythm section, Buckingham's imaginative flair, Nicks' wildcard charisma and Christine McVie's singalong soulfulness restored to the heart of the matter, there is really no way this band could be anything less than extraordinary. A lusty mass singalong of Don't Stop spoke volumes about how their audience felt about the return of the Mac.