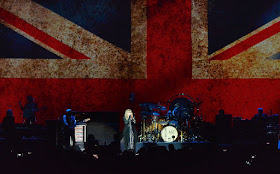 FLEETWOOD Mac's London dates for their On With The Show tour sold out almost immediately, but the frantic mouse clicking paid off for the fans lucky enough to nab tickets.

The iconic band performed their first UK date at the O2 Arena last night and wowed the crowd with a career-spanning 23-song set.

Fleetwood Mac played the first show of their UK tour at The O2 in London last night, playing a three hour set that focussed heavily on the recent return of Christine McVie, and also saw Stevie Nicks dedicating a song to "spectacular songwriter" Adele. We were there, it was pretty special.

The London show, which kicked off the band's UK tour, opened with 'The Chain', which was closely followed by 'You Make Loving Fun' and 'Dreams' - much to the delight of the 20,000-strong crowd.

Fleetwood Mac review – back together, and just about perfect
by Caroline Sullivan
The Guardian


“Let’s get this party started!” isn’t the introduction you expect at a Fleetwood Mac show, and especially not from Stevie Nicks, creator of the Hollywood Hills hippie-mystic archetype. But tonight is the 82nd gig of their year-long On With the Show tour and Nicks, splendid in trailing black lace, feels they’ve turned a corner in their relationship with Christine McVie. The singer-pianist’s nervousness about rejoining after a 16-year break has given way to wholehearted mucking in. Nodding towards McVie’s keyboard, behind which she is tall and commanding, Nicks roars: “Now I think we can safely say our girl is back!”

Full Review at The Guardian


When the individuals surrendered to the collective, the evening turned celestial, says John Aizlewood

Like all the best potboilers, there’s a twist to Fleetwood Mac at every turn. This time around, their wildly successful On With The Show tour sees the return of elegant 71-year-old Christine McVie (who left in 1998) rekindling the squabbling quintet’s mega-selling Seventies/Eighties line-up.