Fleetwood Mac in Ziggo Dome - May 31st and June 1, 2015
lflmagazine.nl
[translated review - original at the above link] 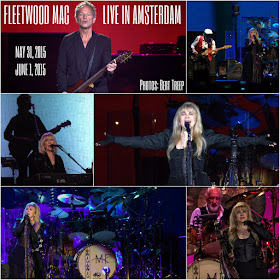 The return of Christine McVie Fleetwood Mac appeared about three years ago as unlikely as a new album of Pink Floyd or a musical comeback of David Bowie. Or as Stevie Nicks's not so long ago expressed in an interview with Rolling Stone, "The chances of this are not hit bigger than the Earth by an asteroid." She stood in October 2013 still with her three male colleagues in the Ziggo Dome, last night Nicks shared the stage with the same room with the other women of the classic Rumours occupation. Did McVie standing adhere after more than fifteen years of absence?


Joy about the comeback of the lady who wrote so many classics and sang with Fleetwood Mac is not only visible on the faces in the audience, but also in the rest of the band. "I think we can say: she's baaack" Stevie Nicks raises some theatrical during one of the breaks between the songs. And so we are reminded tonight a couple of times on this joyous occasion. And rightly so, because this band - or at least the version of Fleetwood Mac who dominated the pop charts since the mid-seventies - is simply not complete without Christine McVie.

So too was shown when in 2013 an unimpressive ep appeared on the then reduced to a quartet Fleetwood Mac. During the first of two nights in the Ziggo Dome setlist consists therefore entirely of successes from the glory years, where McVie was responsible for. Elegant British singer looked perhaps a bit duller than Nicks, but they wrote some of the most beloved songs in the works, including Do not Stop, You Make Loving Fun and Everywhere.

On With The Show
Of course runs the On With The Show Tour not only McVie. Rarely was undersigned all such chills (positive meant, of course) during the first song of a concert and during The Chain, thanks to the combined voices of Lindsey Buckingham, Stevie Nicks and Christine McVie - all still about as powerful as the nearly twenty year-old live album The Dance, but helped by some background vocalists. In addition, attach as many as eight other songs popmijlpaal Rumours how well those turbulent times made ​​plate after all these years remains: from McVie's optimistic sounding You Make Loving Fun and an acoustic Never Going Back Again to the ominous Gold Dust Woman and singalong Go Your Own Way. And of course, win all those numbers only effective if you know what kind of history behind it.

With her witch-like dress and characteristic low, almost masculine voice remains the most iconic Stevie Nicks of Fleetwood Mac band member. But it's her ex Lindsey Buckingham that brings the most energy and intensity, including during the almost punkish I Know I'm Not Wrong by double album Tusk (1979), a violent solo in the stunning I'm So Afraid and obviously the well-known acoustic version of Big Love. The "undress" a pop or rock song adds not always something, but Buckingham's brilliant fast guitar work and bestial vocal play make this arrangement is superior to the original.

Perfect pop songs
Big screens beside and behind the stage not only show the band in action, but also matching atmospheres. Thus we see the - for her age - young-looking Nicks in the background graceful dance in the rain. Not that the band needs these visuals, because the vibrant renditions of many perfect pop songs make Fleetwood Mac might be more exciting than ever. At most, the drum solo from Mick Fleetwood during World Turning rubs against it unnecessary to, though he and bassist John McVie also deserve their moment in the spotlight. Yet logically draws no attention to itself so as Christine McVie, who evening darkness closes with perhaps its most beautiful ballad: Songbird. At such a moment at the end of a very impressive concert you realize what the group lacked in the years of her absence. Last month I wrote in my enthusiasm that AC / DC probably show of the year was given at Gelredome, but maybe I should come back there already.

THE SPELL IS COMPLETE AGAIN WITH FLEETWOOD MAC
by Randy Timmers
oor.nl
[translated review - original at the above link] 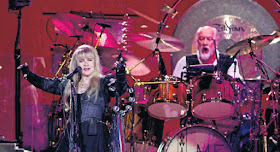 According to Lindsey Buckingham tonight and tomorrow will be the last times we can admire Fleetwood Mac live on Dutch soil. One more tour and album and stops the tape. Should this prove true, then we can imagine no better farewell than it shows. For the first time in more than sixteen years, the legendary late seventies occupation of Fleetwood Mac, the lineup behind Rumours to Tango In The Night , which is complete again. In 2013 sang a song Christine McVie missing link along during shows. Apparently when the itch again to the singer, who four months later with its old partners hung on the phone. Mind if I rejoin you?

With McVie's return reopen a long unread chapters of the songbook of Fleetwood Mac. 71 is she now, if you see off not believe her and injects much needed youthful lightness in the double foreman formation over the past few years and this aandeed Ahoy hall. Where Stevie Nicks and Lindsey Buckingham show as always draw to themselves, albeit with great highlights as Landslide and Big Love , McVie is no time solo on stage. On the right wing should she, proudly behind the keys, as an essential link between the front and rear, and stellar rhythm section. The great pop songs that the singer wrote, including You Make Loving Fun , Little Lies and Everywhere , are for the first time served in almost twenty years, sound as a bell and increasing powerful material as I'm So Afraid and Tusk off.

Fleetwood Mac is tonight in its full glory and to do, within the frameworks of a greatest hits show, little concessions. Two and a half hour is almost all the best of the past and band will also be back at the tumult which the group more than once did fall apart. "It's safe to say we're all in a band personen That has had it's share of ups-and-downs," Buckingham says at one point, with a distinct smirk on his face. That mutual really good seem, especially evidenced by the strong play dynamics between these personen . Do not Stop , extended piano and guitar, is a euphoric collective highlight of singing and Songbird serves as enchanting valve, which McVie and Buckingham share a darkened stage. Such heartwarming magic do not live when the connections are weak.

Musically splashes sparks as usual from the shelves. In the encore screams, slaps and smashes Mick Fleetwood on drums are modest fortress from inside to smithereens and Buckingham, always undervalued at best or- lists, makes a solo show where even the public is involved. Vocal is ripened tasty; For example, the voice of Nicks is still gorgeous and thousands recognizable, but the slight aging makes sweet songs like Silver Springs a lot more pleasing. Thanks to the always unique roles within the band, with three stars that add their own style and sound, the diversity can not much larger. It is nicely alternated between rock bombast of Buckingham, sometimes the Santana-like incantation of Nicks and McVie summery pop.

Who saw Fleetwood Mac in recent years without the latter, however, will have to admit that the show is perhaps a little predictable. It is just as open in 2009 and 2013 with a series of numbers Rumours and the band then plays also on safe , by not taking too deep dive into the oeuvre. In addition to the hits that come with it McVie, only first single Over My Head fished out of the archives. With two days Ziggo Dome had the band can afford instance Go Your Own Way sometime not to play, but our crystal ball predicts that the number will also be during the second concert just for the party. Great course for those who see the Fleetwood Mac for the first time, but seasoned fans expect more.

Should this really be one of the last shows, it is certainly a wonderful final word of one of the best stories in pop history. A band full of individual stars, which need the light of the other to really shine himself. It would not surprise us if Fleetwood Mac here a few years Mathews state, but with new material. In an interview with pop magazine Mojo weakness bassist John McVie this weekend earlier statements from Buckingham. These are not necessarily the last shows; it could well be the last shows. In other words: Do not stop thinking about tomorrow .
Nickslive at Thursday, June 04, 2015
Share