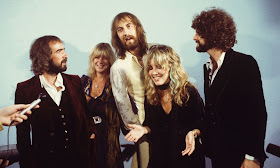 The Guardian
by Tim Jonze


Those heading for the Isle of Wight festival will see something Mac fans feared they would never see again: Christine McVie’s return after a 16-year absence.

To listen to Fleetwood Mac’s Christine McVie speak, you’d never guess she was a member of one of the world’s most successful – not to mention debauched and dysfunctional – bands of all time. Level-headed and prone to understatement when I interviewed her for the Guardian in 2013, she described the songwriting gift that enabled her to knock out such hits as Don’t Stop and Little Lies as follows: “I don’t know what it is really … I think I’m just good with hooks.”

During that interview, she went on to discuss the band’s legendarily gargantuan drug intake without a hint of romance – “Well, I’d be lying if I said I was sober as a judge” – and described the crazy routine the band adhered to at the peak of their success in similar terms: “You look at tennis players; it’s the same kind of thing.”

So grounded can McVie appear that it’s almost surprising that the songs she writes take flight so effortlessly: heartfelt and clear, they’re given extra wind beneath their wings by her pure, songbird falsetto. This summer, those heading to the Isle of Wight festival will get to see her perform them, something many Mac fans feared they would never see again: McVie left the group in 1998, succumbing to a fear of flying and longing for a quiet life in the country; she rejoined in 2014.

It’s a testament to Fleetwood Mac’s abundance of talent that they have not just survived without McVie and her many hits during this 16-year absence, but delivered storming three-hour sets packed with classic tracks. Great though those shows were, it wasn’t quite Fleetwood Mac. McVie’s songs don’t just stand out in their own right, but also provide a counterbalance to the other artistic directions in the band. Less mystical than Stevie Nicks’ and less wilfully experimental than some of Lindsey Buckingham’s, McVie’s simple songs of love nonetheless brim with a sense of positivity, not to mention an abundance of melody.

Her musical gifts – let’s not forget she’s a skilled keyboard player with a style schooled in the blues – are not the only reason Mac fans should celebrate her return. In a famously fractured band, whose existence always seems precariously balanced, thanks to decades of broken marriages, flings and rows, McVie’s down-to-earth personality provides a steadying role similar to that of her songs.

She always seemed capable of rising above the tangled love dramas that caused jealously and tantrums among the men, and her enduring friendship with Nicks helped the pair to face the perils of being female artists during the sexist 70s. When McVie first left, Nicks said she was heartbroken; today she talks lovingly about having her musical sister back in the band: “When I finish Silver Springs, Christine waits for me and takes my hand,” she recently told Canadian magazine Maclean’s. “We walk off and we never let go of each other until we get to our tent. In that 30 seconds, it’s like my heart just comes out of my body.”

McVie is too key a figure for Fleetwood Mac to have carried on touring without her, and drummer Mick Fleetwood has admitted that her return to the band makes them “complete” again. Speaking to the Vancouver Sun in March, he added that he “couldn’t think of a better ending, when this does end … we’re all on the same page and writing the same last chapter”.

Comments such as this only add to the sense that their Isle of Wight show will be a magical, uplifting and emotional experience. Or “not a bad gig”, as Christine may well say afterwards.