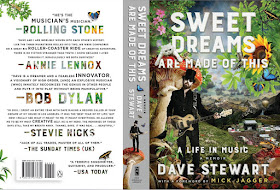 Eurythmics founder Dave Stewart tells Confidenti@l that his upcoming memoir “Sweet Dreams Are Made of This: A Life in Music” is full of revelations, one of which recalls a debauched trip to L.A. in 1983 when the Eurythmics topped the charts and he wound up on top of Stevie Nicks.

“We were number one in America and I met Stevie backstage when we played the Wiltern Theater and it was packed full of loads of singers and Los Angeles glitterati and I got whisked with Stevie back to her house to a party that she invited me to,” Stewart tells Confidenti@l. “But when I got there, there was no party, just an empty house. So I thought, ‘Well this is interesting.’ We wound up staying together.”

Things got even more interesting for Stewart a few days later when he wound up in a recording studio with Nicks and her ex-boyfriend, producer Jimmy Iovine.

“There was a great point at the piano where she and Jimmy were arguing at the piano and he said, ‘Don’t argue in front of my friend, you don’t even know him,’ and she said ‘What are you talking about? We slept together the other night.’”

Those sessions resulted in Stewart writing “Don’t Come Around Here No More,” which wound up being recorded by Tom Petty in 1985.

Stewart says that for better or worse, his four kids, aged 13 to 28, will probably learn a few things about their pop-star papa when his book hits shelves next month.

“I’ve pre-warned them,” he laughs, unsure of whether or not they’ll read his book. “I think at one point in their lives they probably will ... well, what can I say? What can I do, you know?”

Stewart also says his 1983 smash hit “Sweet Dreams,” which inspired his book title, has also become something he can’t control.

“There are hit records that do well in one country, but don’t do anything in other countries,” he said. “When you have a record that it’s a hit in every country, it becomes like (the song) ‘Happy Birthday.’ Wherever you go, it’s playing somewhere to this day. Someone in Korea is singing it in a karaoke bar while it’s on the sound system when you’re buying your groceries. And you get in the car and it’s on and some cover band is playing it somewhere. It’s a great thing.”


Sweet Dreams Are Made Of This
will be released on February 9th. The book can be pre-ordered via
Amazon, Barnes & Noble and IndieBound.org.