"I think people could do with a new Mac album from the five of us.” - Christine McVie 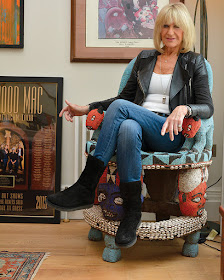 After 16 years in the Kent wilderness, Christine McVie and Fleetwood Mac are creating magic once again… there’s even a new album in the pipeline.


Fleetwood Mac’s Christine McVie offers me tea and a seat on a plush sofa. Among the things on her coffee table is a picture book called Crap Taxidermy. There’s a platinum record on the wall, and a stuffed dog looks out from under a side table next to a flickering fireplace.

McVie is a dog person – she had two until recently. “I had a lovely time with them, but do I miss having dogs? Dogs tie you down. Who’s going to look after them when I go on tour?” she says. “I thought about getting a bird – a parrot perhaps – and teaching it to talk.” But McVie doesn’t want to be held back any longer. “I want my freedom now.”

As one fifth of Fleetwood Mac, Christine McVie has helped define popular music since the late 1960s. With her bandmates, McVie has written songs that are loved across generations. With 1977’s Rumours, Fleetwood Mac became superstars, experiencing both critical acclaim and public adoration. She explains that there is something about the band’s music, and Rumours in particular, that appeals to all ages. “Parents played the album at home, but kids gravitated to the album as well; and now some of their children are turned on to Fleetwood Mac.” It’s something that McVie is still surprised by. “It’s really quite amazing, the dichotomy of people coming to see the shows – it ranges anywhere from 80 to eight. It’s very exciting.”


Nearly 40 years on, Rumours is an album that still resonates with audiences today – herself, included, says McVie.

“I think people love Rumours – I think that the songs are timeless and ageless. I still love Rumours too; I don’t listen to it all the time, but when I do, I’m always stunned by how fresh it still sounds.”

McVie and Fleetwood Mac achieved a virtually unparalleled level of acclaim and adoration with Rumours, but the road to success wasn’t always easy. “There weren’t that many women around back then [the 60s and early 70s]. It was a very male-oriented industry. I wasn’t in the pop industry at that time – I was playing in a blues band, so that was even more unusual.”

McVie had her first taste of life on the road with British blues outfit Chicken Shack; a gig she held down until she married her future band mate and Fleetwood Mac bassist John McVie in 1969.

“We had a Ford transit van and we used to schlep up and down the M1,” she recalls. The young songwriter was paying her dues, living a lifestyle far removed from what she would later experience with Fleetwood Mac. “You couldn’t say it was a life of luxury by any means.”

After a couple of years playing the British blues circuit, the band made the biggest decision of their career. “We moved to America. We thought it would be great to move to LA, because we weren’t doing anything here. We couldn’t buy a gig.”

Soon after the relocation, the band’s guitarist and driving force over the past few years Bob Welch departed, leaving Fleetwood Mac guitar-less. A chance meeting with guitarist Lindsey Buckingham led to the band bringing Buckingham and his lover and collaborator Stevie Nicks into the fold. “I was a bit cagey in case we didn’t get on or something – but we met for dinner one night and we all got on really well. We didn’t even have auditions. The rest, really, is history.”

The tide truly began to turn with the band’s 1975 self-titled album (referred to as the “White Album” by McVie) – the first with Buckingham and Nicks.

The album demonstrated a more pop-oriented sound than before. It was during the writing of Fleetwood Mac that McVie saw the band’s potential to be big. “I remember that I’d written a song called ‘Say You Love Me’. We went into a little rehearsal room in a cellar somewhere, and I said: “Well, it goes like this…’ When the chorus came, Stevie and Lindsey both chimed in with the most fantastic harmony,” says McVie.

“We all had goose bumps. That was the moment when I thought: ‘This is going to be amazing’.” With Buckingham and Nicks, the band took on an unusual dynamic. “The combination of two Americans and three Brits, two girls and two couples as well, made for all kinds of things we never could have expected.”

More than a year after its release, Fleetwood Mac went to number one on the Billboard 200 chart. “That took some time to take off,” says McVie. “Once we started touring, people started to flock to see us, and they would buy the album.” The band was receiving huge support from radio, and was riding a wave of critical acclaim and success before the band began to record a follow-up. “I don’t think people realised, but the 'White Album' was number one in the charts about six months before we even made Rumours.”

What happened next is rock and roll legend. Personal relations between band members hit a low; the McVies were in the midst of a divorce; and Nicks and Buckingham’s on-off relationship was strained. “When we finished Rumours, we knew we had something good – but we weren’t getting on very well. Stevie, Mick [Fleetwood] and I would get on great; Lindsey, Mick and John would get on great, but the ‘couple’ thing got quite tense in the studio sometimes.”

Against adversity, Fleetwood Mac made one of the finest albums of their career – and one of the most popular albums of all time. Rumours is estimated to have sold more than 40 million copies. McVie says there is an understanding between them, which leads to memorable music. “What’s that saying? ‘The whole is greater than the sum of its parts’. In our case that is true, because there is a great chemistry between the five of us. We’re all different, but we connect musically in a really strange way.”

In 1998, after continual chart-topping albums and lucrative tours, McVie left the band. “My father died in 1990, and I was desperate to move back to England,” she says. “I wanted to be closer to my brother who was my only remaining close family. I’d also developed a chronic fear of flying – and the band knew when I did the last tour that there was no persuading me to stay.”

McVie spent the next 16 years in Kent, restoring her house and looking after two dogs. Now McVie has mixed feelings about her time out of the spotlight. “I could say I have regrets, but then there were quite a few years doing that that I did enjoy,” she says. “It was peaceful, and I learned about birds. I just wish I’d filled that 16 years with a hell of a lot more. After the house was finished, I was bouncing off the walls. It was an isolating time. I’ve wasted a bit of my life, and I want to make up for it now.”

McVie says she came to a realisation. “There came a point when I finished doing the house that I realised I was just sitting in the country, rotting away. I thought: ‘What am I doing?’”

McVie sought the help of Dr. Richard Wolman, a Belgravia psychiatrist who helped her overcome her fear of flying. “He worked with me for quite a long time.” Soon, the idea of getting back with the band began to take shape. “It just so happened that I was thinking about what it would be like to go back to Fleetwood Mac. I called up Mick and said: ‘Do you think it’s possible? Would you guys even be interested?’” Fleetwood was arriving in London and suggested meeting to discuss a reunion.

As part of her therapy, Dr. Wolman suggested McVie buy a plane ticket. “He said: ‘If you could get on a plane, where would you go?’ I said Maui, because I love Hawaii. He told me to just buy a ticket, and said I didn’t have to get on it, but it would be a positive move. So I did.”

McVie flew from London to Hawaii with Fleetwood, who lives on the islands. “I ended up going on stage with his little blues band – he owns a restaurant called Fleetwood’s on Front Street, Lahaina. He persuaded me to play a couple of songs with his band, and I loved it.” Soon she spoke with other members of the band, and the five members that recorded Rumours were reunited.

Since McVie’s return, the band has completed a world tour taking in 120 shows. Now Fleetwood Mac is in the process of recording a new album.

“I started sending demos to Lindsey and he worked on them, then we got together to start making a record – we’re talking two years ago now. We only got it half-finished; we’ve got seven or eight songs at the moment, and we’re very, very thrilled with them.”

Fans will have to be patient – getting each band member in the same room is not as easy as it once was. “I’m waiting to hear when we’re going to finish it, which I suspect will be April. Everybody has different things going on. But my feet are firmly planted in this record at the moment, because quite a lot of the songs are mine!

“The songs are fantastic, they have a whiff of Rumours about them. I think people could do with a new Mac album from the five of us.” Once the album is ready, McVie says the band will embark on another tour. “Depending on how decrepit we feel, it may not be the last. We’re all fit, so we think we can do another tour and put a record out – and people seem to love us, so we appreciate that.”

McVie says that playing with the band feels natural, even after so long out of the public eye. “It was strange in the fact that it wasn’t strange at all. The moment I stepped on stage, it felt right – it was like 16 years hadn’t happened.”

According to McVie, there is one song in particular that audiences connect with. “When I do ‘Songbird’, you can hear a pin drop. I’m not saying it’s my favourite song, particularly, but it seems to be the one that I get associated with, because people have played it at weddings, funerals or when their pets die. In all kinds of situations, people play ‘Songbird’, because it’s a little prayer. I wrote that song in 30 minutes!”

For now, McVie is back in London, and enjoying what Mayfair has to offer. “I love it around Bond Street – now I’m back in the city, that’s top of my list: burning some plastic!” As for Fleetwood Mac, she is content just seeing where the music will take her. “It’s a rebirth, in a sense – and it’s fantastic because we’re way over 60. I’m having a ball.”