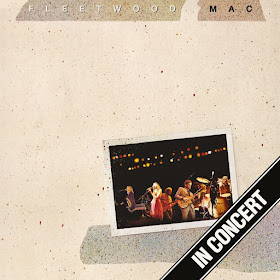 That Were Previously Available Only As Part Of The Tusk: Deluxe Edition

Fleetwood Mac unveiled a massive Deluxe Edition of its revered double album TUSK late last year that featured 22 previously unreleased live performances selected from the band’s 1979-80 tour. Until now, those concert recordings have only been available as part of the set and only on CD and digitally. That will change soon with the release of FLEETWOOD MAC: IN CONCERT.

All of the live music from the 2015 reissue of TUSK will be available on March 4 from Warner Bros. Records as a three-LP set. Pressed on 180-gram vinyl, the albums will be presented in a tri-fold jacket.

The music heard on IN CONCERT was recorded at four stops during the band’s 111-show world tour promoting TUSK. This new collection serves as a worthy companion to the classic 1980 album LIVE. Although a few songs are duplicated from that album, including ‘Say You Love Me,’ ‘Landslide’ and ‘Go Your Own Way,’ each performance on IN CONCERT is unique and taken from a different show.

IN CONCERT boasts 10 songs not heard on LIVE, including ‘World Turning’ from the Fleetwood Mac’s 1975 self-titled release, and ‘The Chain’ from the band’s best-selling album RUMOURS (1977), a Grammy-award winning juggernaut that has sold more than 40 million copies.

Several songs from IN CONCERT were recorded at the Checkerdome in St. Louis just a month after the release of TUSK, and only seven shows into the tour. Those performances capture the band already in top form on songs like ‘Angel,’ ‘Save Me A Place’and ‘What Makes You Think You’re The One.’

The rest of the performances were recorded several months later, including 11 songs from the band’s six-night stand at Wembley Arena in London in June 1980. Among the highlights are ‘That’s Enough For Me,’ ‘Sisters Of The Moon,’ and the Top 10 smash from RUMOURS, ‘You Making Loving Fun.’