INTERVIEW Stevie Nicks on the importance of being a romantic

Do people often ask about your songwriting process?

As a writer you don’t have any one way. You write about what inspires you right now. 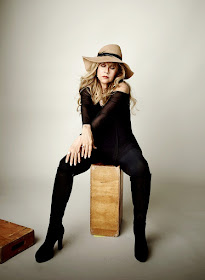 I can be sitting in a parking lot waiting for my assistant to come to the car and I see a couple walk by and I can see their fingers gently touch and see him open the door for her and look at her and her look at him and for a moment they just stand still in time… and then I can go home and write a song about them. Or I can see a movie—say, it’s a movie with Michael Fassbender called The Light Between Oceans—and I can’t get this movie out of my head. The tragedy of this movie is so intense and so beautiful you can hardly stand it and you go home and think about it for days afterwards. It’s everything I can do to not just say “Stop everything I have to go and write a song about this movie because I need to write a song about this fictional relationship that I can’t stop thinking about.”

When people ask me about songwriting, that’s what I tell them. Pay attention to your feelings. It can be anything. Everything. And yes, I can write a really super romantic song today even though I’m not really in a relationship nor have I been in one for a long time. I can take ideas right out of the air, but I have to be really inspired. It has to be something truly inspiring that pushes me to go and write a poem, and then that poem is something that, when I have the time, I will take to the piano. That has always been my process since I was 15 years old.

You’ve spoken about the connection between poetry and songwriting. Is writing poems and songs your way of making sense of the world?


It is. It’s the way that works for me. You know, if you’re gonna write a novel or make a movie about the state of the world, it’s going to be this really long, epic thing. But if you’re writing a poem it can simply be a page—or it can be two or three little verses. Poetry allows you to write a whole story in a very small amount of words and get your point across. I’ve never actually written a long story and I wouldn’t even begin to know how to do that, but poems and songs let me talk about these things in a form I can manage.

I think that poets and songwriters have a lot in common because a songwriter really has to be a poet first.

It’s like when I think about the Twilight saga, those long books. I’m going, “How in the world did that woman write this? How did she come up with all of those characters and the different generations and backstories?” I could never do that. Instead, I’m like, “How about I just write a song about it?” So I did. I wrote a song called “Moonlight” about those books, which I loved. I put my whole heart into Bella and Edward’s story into one small song.

I think that poets and songwriters have a lot in common because a songwriter really has to be a poet first. That’s how we live our lives. It’s the same kind of thinking. Unlike people who write fiction or make movies, we put our stories into these small little containers filled with mostly short lines and verses. This is how we talk about the way we feel and talk about things and explain the world and ourselves. So, yes….whatever it was you asked me, my answer is yes.

I love that you are such a romantic. It seems as though a lot of people who have been in the entertainment industry for a long time eventually lose that, they become jaded or bitter—which doesn’t generally make for good art.

It’s very sad, once you stop being a romantic, you can no longer be a poet. If you are, you’re a lousy poet and nobody’s going to want to read your poems because they’re just jaded and miserable. If you can’t write something that’s going to inspire people they’re not going to read it. They’re going to look at your work and then they’re going to say, “This person is done. That career is over.”

If you can’t make somebody laugh and remember the first time they ever fell in love, then you should just stop.

To inspire people, to make people feel things—that’s why we do this. Maybe you want to make people sob the way we were sobbing the other night at the movies—me and two friends, all of us sobbing so hard we can’t even look at each other—that’s actually a really beautiful thing. If you can’t do that or if you can’t make somebody laugh and remember the first time they ever fell in love, then you should just stop. You should not destroy your former career by trying to keep things going if you don’t have it anymore and the work isn’t coming from the right place. You should just count your money and make investments in real estate and be done. That’s it. You should just go to do something else.

So many young artists celebrate you as an influence and an inspiration. I can’t help but think of Tavi Gevinson’s 2012 Ted Talk in which her final word of advice to young women is simply, “Just be Stevie Nicks.”

I have to tell you, I remember watching it and I’m thinking, “Well I love this. I love watching this but I’m still not exactly sure why they sent this to me.” Then she gets to the very end and I’m thinking this little girl is getting ready to drop a magical bomb here. She’s been working towards something and I can see it in her face. All the sudden she goes, “Oh and one more thing. Just be Stevie Nicks.” I almost fell off my chair.

I knew something was coming but I didn’t know it was going to have something to do with me. When she said that I was like, “I knew I loved this girl.” [laughs] I immediately got in touch with her. I sent her one of my gold moons and wrote her a long handwritten letter. We have really been very good friends ever since. I buy her golden platforms whenever I’m in Paris. I go and see her in her Broadway plays. I just went and saw her in The Crucible which just about put me in my grave since it’s a really miserable, dark story. When we first became friends she sent me a little thing of her playing guitar and singing “Landslide”—and doing quite a good job of it, I have to say. I always thought, “This little girl knows no bounds. She is going to take over the world.” So yes, it’s amazing to have inspired other people, even when you didn’t know that’s what you were doing. It makes you want to keep going. It’s hard to know what else to say except that it’s incredibly flattering and amazing to know that someone you’ve made has touched someone or encouraged someone…or that you’ve set an example somehow just by, you know, surviving and doing your best.

You recently wrapped up a nearly three-year long tour with Fleetwood Mac and now you’re about to head out on a solo tour. Even having done this many times, do you still get the same kind of creative rush in preparing for a tour?

Oh, absolutely. It’s not just the music, you’re also starting to think about boots and clothes and all the fun feminine crazy performer, entertainer stuff that’s going along with it. You’re sitting around with people trying to figure out, which of those 30 songs you rehearsed are actually going to make it to the final set. It is exciting. We don’t have a whole lot of time to prepare. My solo tours are a little looser. Fleetwood Mac rehearses for eight weeks solid, every day. It’s a big rehearsal thing, and with my solo band we don’t rehearse that long, because we’re a smaller thing. We just go. It’s coming at me like a speeding train right now. That makes me a little uncomfortable because I always get the deer in the headlights thing like, “Oh my god. It’s starting the day after tomorrow!” but that’s also a good thing. The faster it moves like that the more exciting it is because you have no choice but to get on the horse. Sometimes I think that’s why I’ve been able to have such a long career. I basically stayed on the horse. [laughs] What else am I gonna do?

– As told to T. Cole Rachel