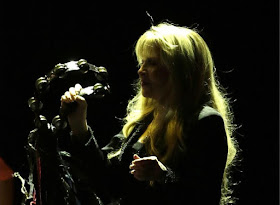 1. For the record, the first song performed publicly at the Las Vegas Strip’s newest music venue—attached to the Monte Carlo resort (soon to be rebranded with the same Park name as the theater and adjacent outdoor plaza)—was “Alone,” the title track from the Pretenders’ latest studio album. The first hit, 1981’s “Message of Love,” arrived two numbers later.

The sound inside Park Theater ranged from fairly muddled for the Pretenders’ first half-dozen songs (turn up Chrissie Hynde’s vocals!; and is that slide guitarist actually playing, ’cause we can’t hear him at all) to somewhat improved midway through that opening set (Hynde sounds great, but there’s still no slide in here) to pretty pristine for Stevie Nicks’ headlining performance (which bodes well for the future).

3. The venue lays out roughly like the Colosseum at Caesars Palace or the Axis at Planet Hollywood, though it’s less ornate than the former and less comfy than the latter. The lobby’s chandeliers and the second floor’s circular patio deck are memorable touches, and two giant side-stage screens provided close views of the musicians, but the theater itself felt a bit generic for Las Vegas’ most modern concert hall.

Sight lines seemed clear across the venue—unless you were seated on the flat floor and someone stood up in directly in front of you. The primo seats appear to be those in sections 201 through 205, and then working back.

A few logistical quibbles: Armrest drink holders render armrests virtually useless (there’s a reason most venues build their drink holders into the backs of the seats in front of you). Concession lines looked lengthy all night, probably because there aren’t many areas set up to sell food and drinks at this point. And upstairs bathrooms are quite small, so time your visits wisely.

4. The Pretenders are one of those, “Oh, I know that song!” bands. Serious fans aside, I doubt most attendees knew they’d recognize so many tunes on Saturday—“Back on the Chain Gang,” “I’ll Stand by You,” “My City Was Gone,” “Middle of the Road” and “Brass in Pocket” among them—and the band still left some of its classic cuts (like “Talk of the Town” and “Show Me”) unplayed during a healthy 15-song set.

At age 65, Hynde remains a strong singer and a magnetic presence, bringing an Elvis T-shirt and good grand-opening awareness to the stage: “Elvis played on this stage … in spirit. We’re the first band to play this stage.” She also marveled that Las Vegas will soon have hockey, and delivered this zinger during her intro of 65-year-old founding drummer Martin Chambers: “We couldn’t get Buddy Rich, because he’s dead.”

5. Nicks explained that she designed her latest solo tour to excavate deeper cuts from her catalog, and she did just that Saturday night, at one point reeling off six-consecutive non-charting songs between Fleetwood Mac classic “Gypsy” and synthy solo favorite “Stand Back.” That unorthodox approach largely succeeded, on the strength of Nicks’ still-powerful pipes (her voice sits in a lower octave these days but retains its singular, spine-tingling quality), her crack eight-piece backing band (Hynde also joined in for “Stop Draggin’ My Heart Around") and her folksy between-song storytelling. The 68-year-old singer occasionally got off track as she related the origins of songs like Buckingham-Nicks oldie “Crying in the Night” or newer solo composition “New Orleans,” but the loose approach brought a cozy, living-room vibe to the sold-out, 5,300-capacity room.

Of course, the crowd cheered loudest for the night’s closing quartet of all-timers—“Gold Dust Woman” and “Edge of Seventeen,” and then “Rhiannon” and “Landslide” in the encore—and whenever Nicks twirled in place, proving that even in shiny new buildings on just-enlivened stretches of the Las Vegas Strip, some things never change.