Stevie Nicks brought her usual assortment of accessories to the Forum on Sunday night, including a tambourine festooned with glittering streamers and a dark-blue garment she described as “the original ‘Bella Donna’ cape.’”

Unchanged since she started wearing it around the time of her debut solo album in 1981, the cape cost $2,000, she said, and was made of silk chiffon — the same material used to create ships’ sails, according to Nicks.

Yet the 68-year-old singer also had one item she doesn’t normally bring on the road, and that was her “dark Gothic trunk of mystical, magical lost songs.”

Two years ago, Nicks reached into the vault for “24 Karat Gold,” an album collecting new recordings of orphaned tunes she’d written as long ago as 1969, well before she and Lindsey Buckingham joined Fleetwood Mac and quickly became pop superstars.

Now, with Fleetwood Mac on a break following last year’s reunion tour with Christine McVie, Nicks is touring behind the record, performing those lost songs for adoring audiences happy to hear them (provided she also sings “Gypsy” and “Stand Back,” of course).

Implicit in any such project is the determination to set a story straight — to show it was the world, not the artist, that kept this music from achieving its full potential.

On Sunday, for instance, Nicks told a story about recording “Starshine” decades ago at Tom Petty’s place in the Valley. Then she suggested the crisp, hard-driving rock cut would’ve been a huge hit if only she or Petty had been putting together an album at the time.

Because they weren’t, she said, “it ended up in the trunk.”

Instead of bitterness, though, Nicks found warmth in her recollections, helped along perhaps by the concert’s location — not merely in her hometown but at one of the arenas where Fleetwood Mac helped invent arena-rock.

“Ah, the Forum,” she said at one point, and you could sense the fond memories swimming in her head.

Indeed, as strong as Nicks’ singing was, she was even better company between songs as she told funny, detailed stories about where the music had come from.

“Belle Fleur,” she said, had been inspired by all the times she’d happily left behind a boyfriend at the beginning of a Fleetwood Mac tour; “If You Were My Love” was about … well, she couldn’t place the name exactly.

She provided entertaining background on more familiar tunes too, including “Stop Draggin’ My Heart Around,” her early-’80s duet with Petty that she said represented her attempt to worm her way into the Heartbreakers. (Here she shared the tune with Chrissie Hynde of the Pretenders, who opened Sunday’s show with an assured set of punchy, no-frills rock.)

Nicks also did an extended homage to Prince, dedicating her recent piano ballad “Moonlight” to him and explaining that she’d written “Stand Back” after hearing his “Little Red Corvette” while in the car driving to Santa Barbara for her honeymoon.

Later, images of the late pop icon flickered across a video screen as Nicks, her voice wavering with emotion, appended a bit of “When Doves Cry” to “Edge of Seventeen.”

In Prince, she no doubt recognized a fellow traveler, someone as devoted to image as to sound. But what gratified about this straight-talking performance was Nicks’ willingness — her eagerness, really — to chip away at her outsize persona.

Like that $2,000 cape, it’s sturdy enough to withstand some wear.

While 2016 has seen more than its fair share of loss in the music world (David Bowie, Glenn Frey, Prince, Merle Haggard, Sharon Jones, Sir George Martin and Leonard Cohen for starters), two of classic rock’s most celebrated women showcased their distinguished legacies in a sold-out concert at the Forum in Inglewood on Sunday.

On the final night of their two-month 24 Karat Gold tour, Stevie Nicks and the Chrissie Hynde-led Pretenders seemed energized by the large and enthusiastic crowd, and the two icons were frequently able to acknowledge each other and the bond each has with her fans.

Over the course of more than two hours, headliner Nicks and her backing ensemble (six musicians and two female backing singers) showcased both Fleetwood Mac classics and solo hits. However, it seemed the Phoenix native was equally revitalized by material not well known, acknowledging some songs had not made it on her records despite the strength of the initial demo recordings.The 68-year-old songstress was in an especially introspective and reflective mood, often providing details on the genesis of her songs and celebrating the life of her late friend Prince.

Among the hidden gems performed was “If Anyone Falls,” a beautiful song enhanced by colorful and moody visuals projected on a large screen, including two ghostly ballet dancers. But Nicks could turn things around quickly; for the third selection she jump started the mood in the Forum when Hynde joined her on stage for the playful duet “Stop Draggin' My Heart Around” (originally recorded with Tom Petty). Other audience favorites included “Gypsy” with Nick’s seasoned soprano enticing while artful black & white images of rain and old city views appeared in the background, the propulsive rocker “Enchanted,” and a powerful song written in the wake of Hurricane Katrina (“New Orleans”) among other standouts in the first half of the night.

The last half of her run included the shimmering “Starshine,” driving “Stand Back” (when Nicks twirled during an instrumental break, the crowd cheered), a luxurious “Crying in the Night” (one of the oldest songs she performed, a track from 1973’s “Buckingham Nicks” album), the piano-anchored “Edge of Seventeen,” and sweeping encore featuring two of her most beloved Fleetwood Mac classics, “Rhiannon” and “Landslide.”

Chrissie Hynde’s hour-long set leading the Pretenders may have drawn the most cheers when radio hits were played, but there is little doubt the Ohio native is equally concerned with the here-and-now. The Pretenders’ 15-song outing featured a number of songs from her wonderful 2016 album “Alone,” one of the best discs of 2016. In fact, the Pretenders kicked off their set with the title track from the Dan Auerbach-produced effort, with lead guitarist James Walbourne unleashing some blistering guitar work, and the 65-year-young Hynde showcasing her distinctive vocals with the power of her early ’80s performances.

She also positioned her new album prominently with “Gotta Wait,” another guitar-anchored new track that immediately entices. Listening to the Pretenders (whose lineup includes original drummer Martin Chambers) was to be firmly reminded that Hynde’s songs never sound dated. If “Message of Love,” “Back on the Chain Gang,” “Mystery Achievement,” “I'll Stand By You” and “Middle of the Road” were released today, this writer’s guess they would still find favor with discerning modern-rock audiences.

Fans are likely divided on her position, but Hynde’s clear-cut admonitions to fans positioned near the stage to “stop taking pictures” and to “stop using your phones” was cheered by many in the crowd. A rocker at heart, Hynde still believes in the power of live music to sweep fans into another realm sans distractions that take the focus away from a powerful performance.

Indeed, this is one long-time fan who has seen many fans experience too much of their concert-going experiences through the distractions of their smart phone while missing out on the singular power of a great rock show. 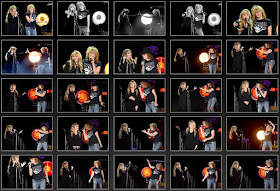