Mick Fleetwood 'We’re looking forward to putting on an incredibly vibrant show that is truly groundbreaking, for us'

Mick Fleetwood on the new Fleetwood Mac: 'It's important to remain creative and not tread water'


While the news last month of Lindsey Buckingham’s departure from Fleetwood Mac (with Tom Petty & The Heartbreakers’ veteran Mike Campbell and Split Enz/Crowded House’s Neil Finn taking Buckingham’s place) came as a shock to many Mac fans, this is hardly the group’s first major lineup switchup over the past half-century. Buckingham actually didn’t join Mac until 1974 (following the departure of co-founder Peter Green) and left the group once before, in the late ‘80s (he was replaced by Billy Burnette and Rick Vito at that time). As drummer Mick Fleetwood the lineup’s one consistent member since the beginning, says, “If anyone out there has a sort of a track record of the history of this crazy band known as Fleetwood Mac, it is certainly peppered with changes through the years. … We’ve had probably four, five, six, seven major changes!” 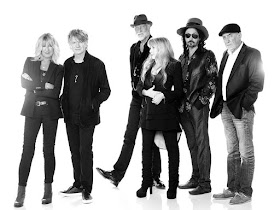 Fleetwood is reluctant to go “into all of ups and downs and the details of where we ended up” with Buckingham this time around, but he gives “huge kudos and respect, forever and before and now and into the future, of what Lindsay Buckingham has always been within the ranks.”

He also reveals that he and longtime bandmates Stevie Nicks, Christine McVie (who took a hiatus from the group from 1998-2013), and John McVie “thought very, very hard and long about going forward.”

In fact, they even considered not going forward at one point, but it didn’t take long before they realized they wanted to stick together.

“Well, it was a huddle, really. It was a team huddle of the existing band members to really not panic into anything, other than really following our hearts as to what this meant — which was huge, any which way you look at it,” Fleetwood muses. “And once we had galvanized that approach amongst the four remaining folks, the ladies and the guys in the band, we took the bull by the horns. It was really as simple as that. But it certainly took a real, meaningful breath. All of us, probably in our various ways, came to that decision that we want to, we need to, we feel good about it.

“And once we all felt that we really wanted to do that, it got hot and heavy as to how this is going to be really musically uplifting for the existing band — the band that we have now — and have it be believable for everyone out there that has been loyal and taken that journey with the crazy band Fleetwood Mac.”

The answer was to recruit Campbell — not a major surprise, considering his long history playing with Nicks — and, as more of a curveball, New Zealand singer-songwriter Finn. Fleetwood seems thrilled to be working with both “lovely gentlemen,” describing the new lineup’s dynamic as being “like a bunch of teenagers doing their thing, coming out of the garage.”

He hints that Campbell and Finn’s respective catalogs will factor into the forthcoming Fleetwood Mac tour’s “huge” setlist (“their heritage and their background is going to be appropriately part of the show”), and he even says it’s likely that the Campbell/Finn collection will record new tunes together.

“I don’t think you can keep the horse in the trap, so to speak, when it comes to Christine and Stevie,” Fleetwood says of the possibility of new Mac music. “They’re still connected to everything about writing and having a whole new approach to it. Mike is hugely conversant with production and has written way more than I ever, ever knew. And he’s worked with Stevie, writing and producing and a lot of stuff that Stevie did through the years with Tom and of course the Heartbreakers. And Neil is a given; he’s just a hugely connected songwriter that really covers a huge gamut.…

I truly believe that [new music] will happen. I’m hoping that we can throw out a couple of calling cards before we go out on the road.

I’m not quite sure that we can apply ourselves to do that, but all of that is to look forward to. It’s hugely important, whichever way you look at it, for a band to remain being creative, not treading water.”

While Fleetwood is enthusiastic about his band’s future, he reveals that Mac’s tour, which officially kicks off Oct. 3 in Tulsa, Okla. (after the new lineup makes its live debut at Las Vegas’s iHeartRadio Festival in September) and will continue into 2019, will delve deep in the band’s archives — dating back to before the famous Buckingham/Nicks era. “We’re really looking forward to doing some spotted revisiting of some of the old blues-based, rock ‘n’ roll stuff we did back in the day,” he says, “like ‘Black Magic Woman’ and ‘Oh Well.’ And I think Stevie’s even threatening to sing ‘Black Magic Woman,’ which sounds more than exciting! … I think everything is just open, looking at what we’ve done since the beginning and no doubt touching on some of the blues stuff that Campbell, very specifically, is insisting that we do. And happily so.”

Fleetwood and his new and old bandmates are still hashing out the setlist (“We’re all exchanging lists, emailing madly backwards and forwards”), but regardless of which songs make the cut, the upcoming tour is bound to be a fascinating look at Fleetwood Mac’s complex and ever-evolving history. And it’s going to be a marathon event. “I was around Stevie’s house the other night with Campbell, and we quietly realized that we were heading towards a three-hour show! It was a sort of comedic moment,” Fleetwood chuckles, adding more seriously: “We’re looking forward to putting on an incredibly vibrant show that is truly groundbreaking, for us, and that’s about as good as it can get for a musician to be in that sort of noncomplacent place.”
Nickslive at Friday, June 15, 2018
Share