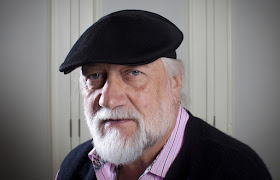 Fleetwood Mac is back and heading out on the road on their new North American tour, and with a revamped lineup. The tour is the iconic band's first since Lindsey Buckingham's departure from the group. But, visiting major cities across the country this fall and early next year will be Mick Fleetwood, John McVie, Stevie Nicks and Christine McVie, along with Tom Petty and the Heartbreakers guitarist Mike Campbell and Crowded House's Neil Finn.

And right before their North American trek kicks off the band will be performing in Las Vegas at the iHeartRadio Music Festival this fall, alongside a star-studded lineup of artists.

Recently, iHeartRadio caught up with Fleetwood Mac's Mick Fleetwood, and he talked about the upcoming trek, what he's looking forward to, one of the most standout moments from the band's incredible 50+ year career (hint: it involves a helicopter ride), and the decision to recruit Mike Campbell and Neil Finn. Read on below.

How does it feel to be going out on tour again?

"The whole premise of going out on the road is something that's actually second nature to everyone in Fleetwood Mac. We're musicians, we love to play, and having the opportunity always to do that is exciting, is thought provocative in terms of what we can do creatively, and we're ready to go. We're going into rehearsals for a couple of months and can't wait to get back out there."

What are you looking forward to the most?

"Going out on the road, what I always look forward to the most is playing and playing regularly. Sometimes, of course, when we come off the road we spend a few months here and there not playing, and so it's really getting back in the saddle and getting into the full music mode, and communicating with other players on stage. That's what I crave. That's what I live for. That's what I was trained for, and that's what I really, really love."

Looking back at your incredible career and back at each tour you've done, do you have a favorite moment or show that was significant or something that you'll always remember?

"I have to say, a memorable moment on the road, was not long after we really had been blessed with the huge, huge success of the Rumors album, and we hadn't really realized what was happening. And we ended up in a helicopter on the way to some huge festival in Texas, and the helicopter [pilot] said, 'Why don't you look down there?' And we weren't in the mood to be really looking anywhere. We were just happy to get there safely. So we gingerly look out of the cockpit and look down. And he said, 'You know what? There's about 350,000 people down there.' At that point, we realized that something had happened that we hadn't really taken notice of, and it was hugely memorable. Then he flew around three or four times over this massive crowd, and at that point, I think it really dawned on, certainly me, and I believe the rest of the band, that we had, as they say in the business, sort of 'arrived.' And with that, was the sense of, 'Oh my god. This is something very different.' It was certainly exciting and I think we played in many ways, almost differently, being conscious of such a vision of so many people where you felt, 'We better deliver something tonight.' That's something that has not only stuck with me that day, but it sticks with me every time we all walk on stage to deliver the goods, and to do what we are as wandering minstrels to play our hearts out, and have people have a great time. That's what it's all about."

You have such an extensive discography. Do you have a favorite song you like to play on the tour? How do you come up with your set list?

"There's such a huge amount of material that we've covered in the last 50 years of the existence of Fleetwood Mac, believe it or not, since 1967, and we're still at it. So, the choice of any particular song, I'm gonna actually pass on, but I will say as a percussionist, as a drummer, I always look to the end of the show. Not because I want it to be over, but usually at the end of the show, you start really cranking out some real serious rock and roll, and I'm a rock and roll drummer, so I'm selfishly always invested in looking forward to the end of the show. And I'm sure on our next tour, we will be cranking out some, some rock and roll, and then finishing off the evening, usually in a nice soulful way as well.

But the material, we're blessed, again, with having so many songs to choose from. And the curve of the set, which is, I don't want to end up sounding like a school teacher, because what it really has to be, is take people through a journey. We often make choices because we feel a certain way about a certain song, you've always got to imagine, how would it be to be in an audience and be sitting and partaking, and being part of that show. And that's really where we always end up is, how would you feel if you're sitting in the audience, Mick? And would you be motivated? Would you be going forward? Would you be excited? Would you be moved? And I think that's really where we end up. We want to take people through a huge emotional journey that, luckily, we're able to accomplish, we hope. I always believe we can, and we pay a lot of attention to that. That by the end of the evening, it would have been something that if I was a fly on the wall myself, as I often do and go and see other people's shows, that I walk out and go like, 'that really took me on a journey and left me with something memorable.' That emotionally sticks to your heart, and that's what we're all about and we feel well equipped to do that."

Tom Petty and the Heartbreakers' guitarist Mike Campbell, and Neil Finn from Crowded House are joining you on tour. How did you come to invite them on the road?

"We've had a change in Fleetwood Mac and we've invited, from Tom Petty and the Heartbreakers, Mike Campbell on guitar, and Neil Finn from Crowded House, and of course, both these great musicians and singers have had incredible success on their own in their solo programs they've been doing from time to time. But, really, after the advent of a change in Fleetwood Mac, what was really important was to find out, within the ranks of the existing members, that we really, really, really had a vision of going forward. Once that was thought about, and we thought about it a lot, obviously because it was a huge change from the advent of Lindsey Buckingham leaving the ranks of Fleetwood Mac. And once we'd made that decision, both of these gentlemen just came to us, not instantly, but Mike Campbell, of course, has worked for many years as the mainstay creatively and right hand man of Tom Petty and the Heartbreakers. A great writer and a great guitar player, and has done work with Stevie [Nicks]. And I had known him a little bit because of that, and it made a lot of sense. I'd suddenly thought that that would be a great match, and the chemistry would be pre-existing, which it is.

Neil Finn came after much thought. A dear friend of mine, and me being a huge fan of his music and his songwriting and his voice and just his basic talent. And both became very believable in terms of what would be a great match to join Fleetwood Mac. With that in mind, we're tremendously excited. It's very much in the mode of what we've done in Fleetwood Mac over the last 50 years, if you look at the history of this crazy band that's full of change. And this is a lovely, exciting change that we're really looking forward to [it], and getting out there, and blowing away on stage and doing what we love to do with these two great talents, Mike Campbell and Neil Finn."
Nickslive at Friday, June 15, 2018
Share