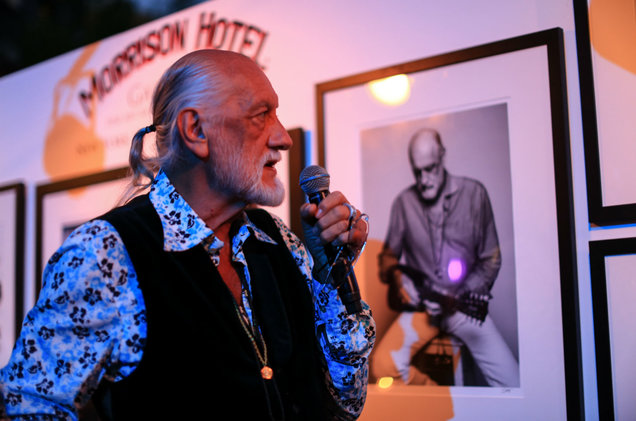 On Saturday night (Aug. 4) in Los Angeles, Fleetwood -- who is in town rehearsing for the upcoming Fleetwood Mac tour -- popped by the Sunset Marquis Hotel in conjunction with the Morrison Hotel Gallery to showcase a selection of his favorite music shots, which included candid photos of the likes of Keith Richards, John Lee Hooker and bandmate Stevie Nicks.

Billboard caught up with Fleetwood on site to discuss his love of rock photography, his secret mission to infiltrate the stash of early Fleetwood Mac shots that McVie has been holding hostage and what he’s most looking forward to about his band’s upcoming tour.

What are you most looking forward to about the upcoming Fleetwood Mac tour?

We’re very excited. Obviously this is a huge change with the advent of Lindsey Buckingham not being a part of Fleetwood Mac. We all wish him well and all the rest of it.


In truthful language, we just weren’t happy. And I’ll leave it at that in terms of the dynamic.

And he’s going out on the road more or less the same time I think -- not in the same places, I hope (laughs).

So we’re with Mike Campbell from Tom Petty and Neil Finn from Crowded House -- both really credible gentleman and really talented. We are a week into rehearsals and it’s going really well and we’re looking forward, in true Fleetwood Mac style. If you know anything about the history of this band, it’s sort of peppered with this type of dramatic stuff. It’s a strange band really.

It’s ironic that we have a 50-year package coming out with all the old blues stuff with Peter Green, all the incarnations of Fleetwood Mac, which was not of course planned.

But that’s what we’re feeling, especially myself and John, having been in Fleetwood Mac for 55 years. So it’s exciting, totally challenging in the whole creative part of it, and we’re really loving it.

We’re just looking at a whole 18 months on-and-off of trekking around the world like we normally do and having it be fun.