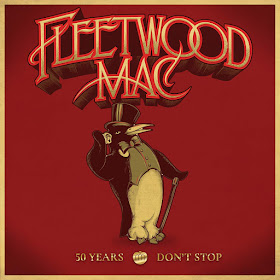 
LOS ANGELES - Fleetwood Mac will celebrate a half century of music this fall with a new 50-song collection that is the first to explore the group's entire career, from its early days playing the blues, to its global success as one of the most-enduring and best-selling bands in rock history. 50 YEARS-DON'T STOP will be available as both a 50-track, 3-CD set ($34.98) and 5-LP vinyl set ($99.98) on November 16. A 20-track single CD version ($18.98) will also be available on the same day. Both versions will be available on digital download and streaming services as well.

The first disc revisits Fleetwood Mac's early years as a blues-rock combo, a six-year period that began in 1968 with the band's self-titled debut and ended in 1974 with its ninth studio album, Heroes Are Hard To Find. Many of the songs featured here were Top Ten hits in the U.K., including "Man Of The World," "Oh Well - Pt. 1," "The Green Manalishi (With The Two Prong Crown)," and the #1 hit, "Albatross."

The second disc focuses on Fleetwood Mac's most commercially successful period with music from a trio of multi-platinum releases - Fleetwood Mac (1975), Rumours (1977), and Tusk (1979) - plus the acclaimed concert album Live (1980). Together they've sold millions of copies worldwide, with Rumours alone selling more than 40 million copies. Several of the band's most beloved tracks come from these albums including "Rhiannon," "Say You Love Me," "Go Your Own Way," "Don't Stop," "You Make Loving Fun," and the #1 single "Dreams."

Fleetwood Mac kicks off a North American tour in October that will travel through 50+ cities, ending in Spring of 2019. Produced by Live Nation, the tour will feature the line-up of Mick Fleetwood, John McVie, Stevie Nicks, and Christine McVie along with newcomers Mike Campbell and Neil Finn.
50 YEARS-DON'T STOP