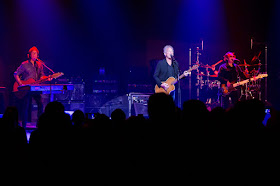 
Fans flocked to the Athenaeum Theatre last night for a solo performance by legendary singer-guitarist Lindsey Buckingham. The Oct. 17 show took place less than two weeks after his fellow (and now former) Fleetwood Mac bandmates took the stage at Chicago’s United Center but band differences (and a subsequent lawsuit) couldn’t hold Buckingham back and, in fact, there was a feeling of freedom in the air as the artist explored the boundaries of rock with an expansive, well-rounded setlist packed with inspired tunes, youthful energy and dazzling musicianship.

The setlist, which Buckingham called “cathartic to curate,” spanned the artist’s expansive catalogue, weaving together an eclectic yet cohesive concert experience for listeners. The bulk of the artist’s solo records were represented over the course of the evening, some of which amounted to the night’s most engaging moments. Lynchian lullaby “Street Of Dreams” creeped quietly through the venue while “Shut Us Down” packed a powerful punch with its driving vocals, impressive fingerpicking and a bit of interpretive handiwork from Buckingham. 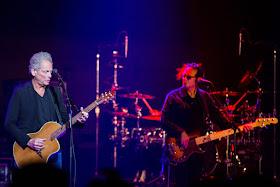 Buckingham inarguably came to play last night. His guitar work was in top form, as were his vocals… utterly guttural one moment, vulnerably tender the next. High energy renditions of Fleetwood fan favorites like “Tusk” and “Go Your Own Way” — the latter which saw the singer enlist folks in the front row to help strum his guitar — had the crowd dancing and singing along, while softer tracks like the goosebump-inducing “Never Going Back Again” entranced the theater in waves of introspection.

The intense and noisy rendition of “I’m So Afraid,” one of the many highlights of the night, built slowly before peaking with a mind-blowing, deceptively-effortless solo by Buckingham while the playful National Lampoon’s Vacation theme “Holiday Road” offered a lighter juxtaposition to the night’s more serious material. Other notable moments included the ultra-primal performance of “Big Love,” which saw the frontman crafting more distinct sounds with a single strum of the guitar than thought humanly possible.

Last night’s midwest performance — part of a larger solo tour spanning the U.S. from now until late December — was in support of Buckingham’s newly-released Solo Anthology: The Best of Lindsey Buckingham. The singer expressed his unbridled enthusiasm for the new album, noting the exciting opportunity it presented for him and his band to perform some of the songs that previously never really got a chance to shine in a live setting. “Surrender The Rain” and the title track from 1984’s Go Insane, both of which were a big hit with fans, come to mind.

Buckingham continues his U.S. Tour with a show tonight at Carnegie of Homestead Music Hall in Homestead, PA. And while some of us are already mourning Fleetwood Mac as we knew it, “you have to accept,” said Buckingham. “Look at things in a positive light. I still love those people.” 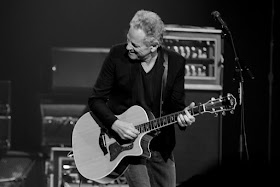