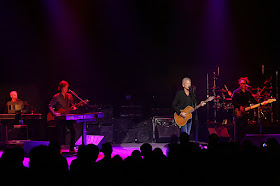 The first time Lindsey Buckingham left Fleetwood Mac, it was on his own accord, though by all indications including a very public lawsuit, the latest round was a result of being asked to leave. But one band’s loss is another man’s gain, at least as far as the singer/songwriter/guitar slinger’s Solo Anthology Tour through the intimate Athenaeum Theatre was concerned when the Rock and Roll Hall of Famer was able to expand well beyond the commercially-minded limitations of the arena-filling juggernaut into decidedly experimental, eccentric and personal territory.

Even so, Buckingham never lost his knack for an infectious hook, launching the almost two-hour concert with the jangly, jittery “Don’t Look Down” and barely taking a breather before diving unflinchingly into the unshakable eeriness of “Go Insane.” For the entire front half of the full band offering, the 69-year-old who remains at the top of his game stuck entirely to solo contexts (“Not Too Late,” “Trouble,” “Street Of Dreams”), but after unplugging all by himself with the fittingly-named “Shut Us Down,” he cast fresh light on FM’s “Never Going Back Again” and completely deconstructed “Big Love” (much like the version from The Dance).

His four kick butt backers returned for “In Our Own Time,” “Slow Dancing” and “Soul Drifter,” then Buckingham took a rare but entirely welcome trip down the “Holiday Road” from National Lampoon’s Vacation. Granted, that cut may have been a bit of a soundtrack novelty compared to strictly following an artistic compass, but it was a front to back dog-barking blast and opened the door for a trio of other big Macs (who the headliner insists he still loves while reaching a point of acceptance that “everything happens for a reason”).

In other words, none of the “Second Hand News” that’s been floating around the gossip circles stopped him from tearing into the stomping “Tusk” with gritty abandon, keeping the raw emotion building with “I’m So Afraid” and unfurling an onslaught of guitar pyrotechnics during “Go Your Own Way.” The encore of less familiar but no less satisfying tunes such as “Turn It On” could be considered either an epilogue to this specific concert or a hint of what might be coming – which probably won’t reach the masses to the degree of a Fleetwood Mac undertaking, but may prove even more rewarding and fulfilling for a restless creative who seems ready for the challenge.

-Review and photos by Andy Argyrakis 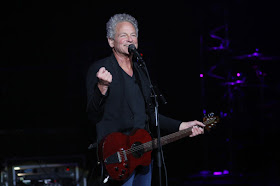