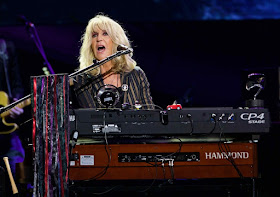 While it might not have happened in the way some fans were hoping for, in the world of Fleetwood Mac, the way the celebration of their 50th anniversary has played out makes perfect sense for a band that across its history has had many a member shuffle in and out the door, while dealing with enough interpersonal conflict along the way to shatter five bands. In the end, when you look back at how the group has progressed through each modification, it’s been the music that has held it all together, locked in place by deep-rooted friendships and relationships.

So when it was announced that longtime singer-guitarist Lindsey Buckingham would not be taking part in the celebratory trek, even as much of a shock as it was, it made sense that drummer Mick Fleetwood, a founding member of the group, wouldn’t allow the Mac ship to be steered in the wrong direction. For guitar work, it made good sense to grab Mike Campbell, a man who had recently been left without a band in the wake of the unexpected death of Tom Petty. The longtime Heartbreakers guitarist has ties to the Fleetwood Mac camp that starting with Stevie Nicks, go back for decades. It was easy to see that he’d bring the right vibe to the group. The band’s next choice, singer-songwriter Neil Finn, of Crowded House fame, was a bit more surprising on paper, but for longtime fans of Finn’s work, it was easy to see how he too, would fit well into the framework.

As they rolled through the opening moments of “The Chain” last night at the Q, it was quickly apparent just how well matched Finn and Campbell are for this band. Finn sang the classic lyrics, “And if you don’t love me now/You will never love me again,” with the same emphatic spirit that Buckingham had put into those words for so many years and Nicks trained that same intense gaze on Finn, once fueled by the prior history between her and Buckingham and perhaps now, still driven by the lingering memories. Watching the pair in that moment, you believed. 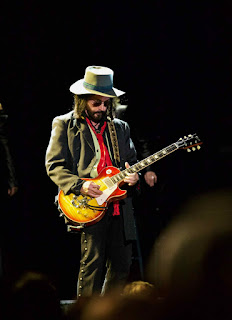 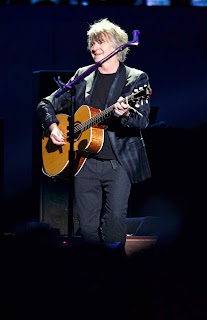 Campbell stood stage left, off in his own musical universe a bit, casually playing the classic riffs in a way that was faithfully close to the originals, while adding his own sound into the mix, In the way that he did with the Heartbreakers, he could just stand there and slay you with his guitar work, without having to be the star. He’s a hell of a guitar player and would demonstrate that often throughout the night, but it’s the humble style in which he carries himself that makes him so endearing to the fans. In fact, during “Little Lies,” he walked over to the side of the stage to acknowledge a group of fans, tipping his hat to them and then flicked a guitar pick into the masses. It was a quick but important added personal touch that demonstrates that he recognizes the connection between the music that has given him a career and how that ties back directly to the fans who have supported him through all of the decades.

So close to Halloween, it perhaps made perfect sense that there was also some Fleetwood Mac cosplay happening, with a good number of fans dressed as Nicks that could be spotted in the concourses and inside the arena. But this is hardly a new thing and the Cult of Stevie needs no excuse to dress up and honor their favorite witch — we’ve seen the same dedicated outfits at other Mac shows previously and in one case at a solo Nicks show in Youngstown on St. Patrick’s Day a few years ago, they worked in a bit of Irish flair. Nicks would not disappoint, extending her arms wide during “Rhiannon,” while later dissolving (thanks to some clever lighting) into a cloud of gold dust at the end of “Gold Dust Woman.” She had visible joy, harmonizing with Finn on a Mac rendition of the Split Enz favorite “I Got You,” playfully wagging her finger at Finn, while later pretending to push him back with her hand. Finn told the story of writing the song “in a small flat in Sydney,” not aware that Nicks was “learning the harmony on the other side of the world as she watched it on MTV.” 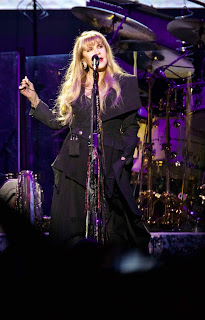 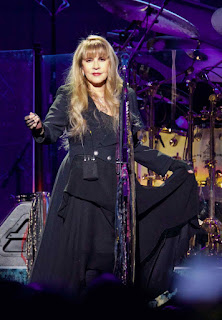 Her most powerful and emotional vocal of the night came at the beginning of the encore as the band played a heartfelt version of Petty’s “Free Fallin’” as pictures of Petty and Campbell and Stevie and the rest of the Heartbreakers flashed on the screen behind the band. Poignantly, several pictures showed the Heartbreakers and Nicks at a very young age together, illustrating just how far back the friendship stretched.

During the band intros, Fleetwood pointed out Finn and Campbell, telling the crowd, “They’ve both had long careers, singing, songwriting and guitar playing, among them.” He added, “We are truly honored to have them as part of our crazy band, Fleetwood Mac.” Later, as Finn was preparing to play a stripped back version of “Don’t Dream It’s Over,” Fleetwood shared with the audience just how much Finn’s music had meant to him personally. “I heard the most beautiful song on the radio.” He said, “It stuck with me for many years and back then, it was exactly what I needed to hear for my heart.” As Finn began to sing the song, it was touching to hear how the crowd was right there with him from the opening lines, singing along. It was as if in an alternate universe, Finn had been playing arenas in America with his band all along and then you remember that he’s actually on stage with Fleetwood Mac and this is his first tour with the group. A warm welcome, for sure.

Some of the most thrilling moments of the night didn’t come from the hits — it was the deeper cuts that one had long hoped might possibly emerge during an anniversary tour like this. With setlists of past tours that often worked in a few interesting things, it didn’t seem possible that they would veer too far from the usual playbook, but as they proved otherwise at the tour opener in Tulsa, Oklahoma that they would go appropriately deep in their 50th year to look back across all eras. There was “Tell Me All The Things That You Do,” penned by Danny Kirwan for 1970’s Kiln House, featuring swampy guitar work from Campbell, with McVie and Finn trading vocals. “Isn’t It Midnight” was another delightful surprise, a McVie co-write rescued from the second side of 1987’s Tango In the Night. They also weren’t afraid to take a few liberties and change things up — a version of their 1968 single “Black Magic Woman,” as Nicks told fans, was “a song from a man’s point of view. So we decided we wanted to do it from a woman’s point of view.” 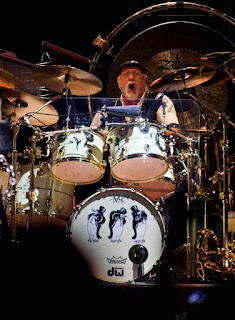 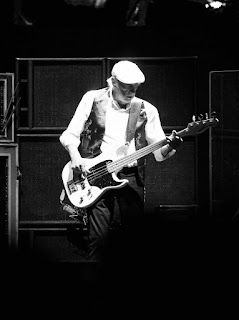 There were other interesting easter eggs to pick out in the band’s performance — the marxophone that Campbell played on “Gypsy” was a curious sight and it was fun to watch him juggle playing that while also handling his guitar work. And Nicks seemed to sing a lot more throughout the show, adding harmonies in places that seemed new. But it was the final song of the encore which has the most room for post-show analysis. “All Over Again” is a song that comes near the end of 1995’s Time album, which Nicks did not participate in as she was out of the lineup at the time. But as McVie shared, it was Nicks who had rediscovered the track and suggested they should do it together as a duet. The lyrics speak to a long and complicated relationship that finally seems to be drawing to a close, but without any regrets. As they sang “Well it’s time to move on to the rain/And finally break the chain,” the symbolism of the night, which had begun with “The Chain,” seemed to come full circle. And if you look at the lyrics of the whole song, there’s a lot more to unpack and wonder about. It felt like the perfect coda to an evening of music that held a lot of those same qualities — songs that always had deeper meaning buried beneath the surface. 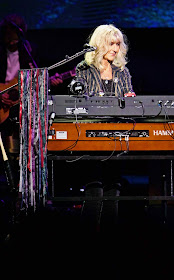 The band has tour dates booked far into 2019 and members have expressed at least a tentative interest in seeing what they could do with this revised lineup musically beyond the stage. Seeing how much Finn and Campbell have loosened things up in Fleetwood Mac, who have always been musically adventurous as a group, it was easy to notice how much fun they seem to be having together playing these songs. Finn carries all of Buckingham’s former vocals well with a natural confidence and a strong presence. Too often, when a group makes a big shift like this, the first tour can feel like they’re working to find their way and figure things out together. That wasn’t the case here — Finn and Campbell fit so seamlessly into the mix that it was as if they had been there all along. Both strong creative types themselves, it would be extremely interesting to see what they would add to the picture should this revised lineup decide to make new music together. As it is, Fleetwood Mac is clearly revitalized and ready for a new chapter, rather than writing the words for a final one.
Nickslive at Saturday, October 27, 2018
Share