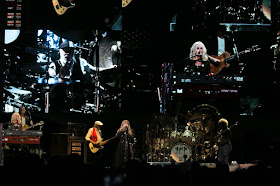 Why, that’s long enough that phrases like “nigh on 40 years’’ was a new way to say “a long time.”

So, with all that and a string of hits that pretty much ended with “Tusk’’ in 1979 (although there would be subsequent studio albums of new music), it’s understandable that the band, while still a good concert draw, has watched its energy level decline over the years.

But it was back Friday night, when the band played to a sold-out Quicken Loans Arena, and really, there’s only one reason why: Lindsey Buckingham got fired.

Now, let’s be up front: Fleetwood Mac is a lesser band without Buckingham, the author of some of its greatest hits and a showman equal to Fleetwood, the wild-eyed inspiration for the Muppets drummer Animal. And Buckingham’s skills vocally and musically are such that it took two men to replace him, Tom Petty & the Heartbreakers’ Mike Campbell and Split Enz and Crowded House’s Neil Finn.

But there’s a big but there:

The addition of the two newbies – primarily Campbell’s slick and tasty lead guitar and Finn’s pure baritone vocals – seemed to have relit the fire that put Fleetwood Mac in the Rock & Roll Hall of Fame.

Nicks in particular had a fire in voice, belting out songs like “Dreams” and a particularly smoky version of “Black Magic Woman’’ that never would have made it into a Mac setlist with Buckingham in the fold. Not because he can’t play it, but because his own catalog is so vast, it would’ve made no sense to go outside.

It’s true that Nicks spends even less time than she ever did exploring the higher registers, and that Christine McVie was at times a bit pitchier than I’m used to for Fleetwood Mac’s designated “songbird” and her signature lilt. But the renewed energy really was something to behold.

Nicks, at 70, is the youngest of the four remaining official members of the band. Fleetwood is 71, John McVie is 72 and Christine McVie is 75. Let’s give a little credit where it’s due, shall we? It’s just not realistic to expect the power of 20-year-old voices from these folks.

And yet the increased energy level – and the addition of that whippersnapper Finn, who’s a baby of 60 – gave renewed strength to songs like “The Chain,” “Second Hand News” (which ironically begins with the lyrics “I know there’s nothing to say / Someone has taken my place”), “Everywhere,” “Gypsy,’’ “World Turning” and “Monday Morning.’’

For more than two hours, Fleetwood Mac kept almost every person in The Q on their feet, running through “Say You Love Me,” “Little Lies,” “Gypsy,” “Landslide,’’ “You Make Loving Fun,” Gold Dust Woman” and, of course, “Go Your Own Way.’’

Fleetwood himself has always been nothing short of manic – hence his pseudo namesake on the Muppets – but he was even wilder with a drum solo that turned into a joyous collaboration with world-class percussionist Taku Hirano, coming out of and back into “World Turning.”

“Rhiannon,’’ the staple that even people who’ve never heard of Fleetwood Mac know, was rescued from its golden oldie chestnut status and given new life with better harmonies – thanks largely to Finn, whose voice meshes with McVie and Nicks far better than I expected it to.

The result is that everyone is feeding off everyone else, which is the way it works when a band is on a roll. Honestly, I wouldn’t be surprised if a few new tunes – or even an album – came out of this incarnation of Mac.

Ah, but that’s just how “Rumours” get started, right?